I think it was Jez Nelson on Jazz On 3 who said that with the Necks, you know exactly what to expect – and it’s different every time. And so it is. They did exactly what was expected – two sets of forty five minutes each. And each completely different, and unique.

It is otherwise hard to describe the Necks. After they come on stage and sit or stand at their instruments, there is silence. And then one of them starts to play. It was bassist Lloyd Swanton in the first set, with long bowed notes; the pianist, Chris Abrahams, in the second, a random phrase. And it all starts from that, and goes wherever it goes. 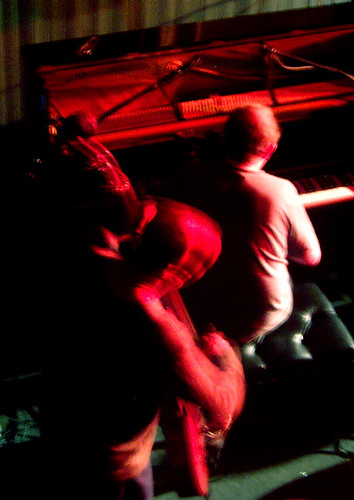 Not jazz as many might recognise it, they include a lot of contemporary classical idiom. The is a distinct influence of serial music: some stretches of both sets reminded me if Arvo Pärt, Steve Reich or Philip Glass. But it is improvised, and generative. The communication and interplay between the musicians was tangible, as they listened, responded, and developed a shared conversation. 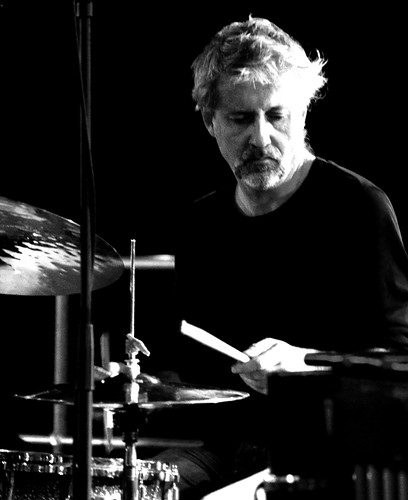 The effect was mesmeric and meditative, the music subtly changing and evolving as it progressed This was music to get lost in. It was hard to discern much structure: there was meter rather than rhythm. In the first set, Tony Buck was drumming phrases, lots of long rolls, rather than keeping time. But the time was there, too.

The last of the short season of Jazz Scotland gigs I went to featured Colin Steele in a quintet. I have seen Steele play a lot over the years: you could say I am a fan; so I was likely to go to this gig whatever, but particularly when I learned he would be playing new material. Much as I love listening to his older tunes (and I do) I have long felt it was time for some new ones.

Over the past couple of years, Steele has been relatively quiet, having changed his embouchure and had to practically relearn to play his trumpet. (He expressed his gratitude to his teachers and others who had supported him in this period.) His sound is as clean as ever, but there was a reticence in his playing on this occasion, possibly because it was the band’s first outing in a while, or maybe because they were debuting the new material, or perhaps the nature of the venue, the Festival Theatre Studio, which, with its theatre seating, feels a bit formal – though as a jazz venue, it has a lot going for it, not least an excellent sound and great sight lines.

The new tunes sat comfortably in Steele’s treasury of folk-infused jazz. A couple were rearrangements of charts he prepared for a big band in the Edinburgh Jazz Festival a few years ago (a gig I sadly missed), but most were brand new. His new(ish) quintet were excellent – long time band members Dave Milligan on piano and Stu Ritchie on drums, and relative newcomers Michael Buckley on saxes and the ever-impressive Calum Gourlay on bass. It was a very enjoyable evening, but it didn’t reach the heights of excitement that Steele can reach. 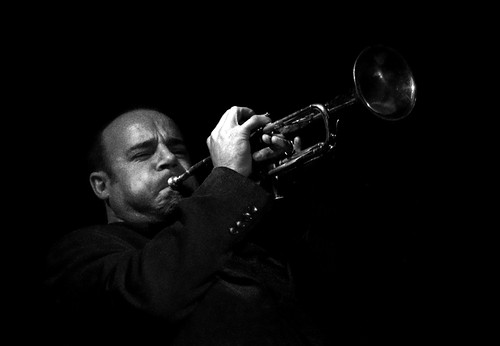 Colin Steele. From a few years ago because, frankly, I have enough photos of Colin…

Steele’s website says they were due to record the new tunes after their tour, which is great news. I look forward to more regular gigs, too!

The previous evening, Stu Ritchie was in the audience at “Playtime”, where the usual “Playtime” quartet – Tom Bancroft, Graeme Stephen, Mario Caribe and Martin Kershaw – were celebrating Thelonious Monk. I find it amusing that a piano-less band focus on music by pianists, but I’m glad they do: like their recent session on Bill Evans, this was an excellent evening of music.

Monk is hugely influential, but his music can still sound jagged and edgy; notes that don’t necessarily belong together are forced into close proximity, and he makes them work.

The quartet started with one of my favorites, In Walked Bud (written to honour Bud Powell), and they ran through many of Monk’s tunes over two sets. So many of these tunes have become standards that it is a surprise they don’t sound hackneyed. Bancroft’s arrangement of Round Midnight made it fresh, by taking it towards the abstract; the tune was still there, but it was like it was haunting rather than dominating the piece. 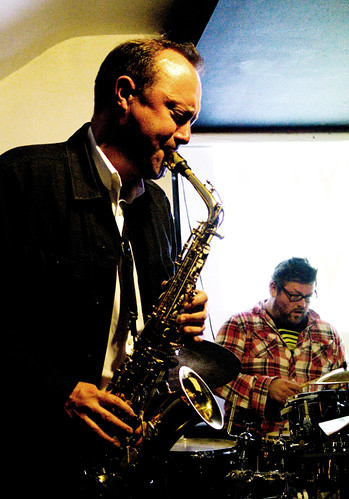 Martin Kershaw and Tom Bancroft at a previous “Playtime” gig. Because I have more than enough photos of them, too.

The quartet made me listen to such familiar tunes in a new way. Without a piano, the guitar took all the chords, Stephen finding interesting ways of expressing the tune.

So: another very enjoyable evening at my local jazz loft!