The first time I went to Ullapool, sometime around midsummer in 1988, I was fortunate enough to catch a concert by Scottish Chamber Orchestra in Ullapool village hall (though I’d say it is more of a town than a village, even thirty years ago). I wasn’t very well informed about classical music back then, but it was a remarkable concert. I have no recollection what was played, but the way the audience reacted the music, and the way the musicians reacted to the audience, was memorable. The hall was packed, the audience and the orchestra pushed close together. I was in the front row, and I was close enough to turn one violinist’s music. The atmosphere was amazing, the locals excited that one of Scotland’s major ensembles was playing for them, the orchestra excited to be playing for such a grateful audience in the long summer evening amongst the tall mountains (though less pleased by the midges). The partying went on long into the night.

So when I saw that SNJO were going to be playing one of their gigs on their tour of the Highlands and Islands, performing with Eddi Reader singing “Alba: Songs of Scotland” when I was (relatively) nearby, it seemed obvious to extend my stay by a day to catch the gig. If those sings work anywhere, it would be here.

Things have changed a bit. Instead of the village hall (which itself seems to have undergone at least one modernisation in the interim), SNJO were performing in a well equipped theatre, part of a school complex.

Like my previous musical experience in Ullapool (though I have visited the town many times since, just not for any concerts!), it was full, people grateful of the opportunity to hear a big band on their doorstep. The guy behind me hadn’t been to a jazz gig before; others clearly knew their stuff. (I think SNJO regularly play in Inverness, a ninety minute drive away.)

Whilst not as intimate as the SCO decades before, and a bit more formal, this was a very enjoyable gig. Reader released an album of Robert Burns’ songs several years ago, and the repertoire in this gig was heavy on the Burns – but they’re good songs, and deeply engrained in Scottish culture. If you’d asked me if we really needed another arrangement of Auld Lang Syne, I’d probably have said “of course not!” Hearing Pino Jodice’s arrangement, it would be a resounding “YES!”

Good songs coupled with SNJO’s knack for working with great arrangers continues to pay off. Florian Ross contributed several of the tunes – Ye Jacobites was particularly moving, and Charlie Is My Darling was rousing. Martin Kershaw’s fun adaptation of Brose and Butter, sung lasciviously by Reader, had the as ever excellent Alyn Cosker stomping away on drums.

Amongst the non-Burns titles were two arranged by Paul Harrison, the gentle opening number of Tommy Smiths’ setting of Edwin Morgan’s poem “Glen of Tranquility”, and a traditional piece that Reader remembered from childhood, which she called Glasgow Barrowlands. As well as a great singer – she has a powerful voice, a fair match for the thirteen piece band – she is a good storyteller, and her introduction to this number aptly described Glasgow’s (in)famous dancehall. Her description of growing up in Ayrshire – “there was sectarianism, some people had a picture of the pope on the wall, some people a picture of the queen. My parents had a picture of the king: we were Presleyarians!” – explained where she was coming from.

Burns was from Ayrshire, too, and Reader’s empathy with the material was evident. Her pleasure at singing with the orchestra was also clear, as she high-fived band members and danced behind soloists. It all worked really well, the musicians seeming to have as good a time as the audience. Which was very good indeed.

And then it was out into the bright evening light of the longest day in the far, far north. I’m sure they were partying long into the deepening twilight, late into the night.

This was a gig that was could have been designed for me. My friendly local jazz night play music by one of my heroes – or maybe that should be anti-heroes, since he was quite irascible, getting into fights on stage (which lead to him being fired by Ellington) and breaking Jimmy Knepper’s teeth and embouchure. The one time I saw him play, at a festival in 1977 and several years before I got into his music, he spent half the set haranguing the audience for being white.

But when I did get into it – well, his music is something else. Working with limited resources, he managed to make his small bands sound like big bands, with tight but fluid orchestrations that really swing. He also wrote my all time favourite tune, Goodbye Pork Pie Hat, from one of my favourite jazz albums, Mingus Ah Um.

So it’s fair to say that I was looking forward to this gig. And I loved it.

The Playtime quartet started as a trio, because, ironically, bassist Mario Caribe was delayed. Still they had played gigs of both Bill Evans’ and Monk’s music without a piano, so playing Mingus without a bass should be a doddle. With guest trombonist Phil O’Malley covering the lower end of the scale and Martin Kershaw on alto the upper, driven along by drummer Tom Bancroft playing a stripped back rhythm to the beat flowing, they opened with Nostalgia in Times Square. As a trio they were remarkably effective and resourceful, Kershaw getting really low notes to mimic the bass during O’Malley’s solo.

Then Mario showed up and they really got going. Next up was Goodbye Pork Pie Hat, and then they spent the next two hours or so running through some of Mingus’s most famous repertoire. My Jelly Roll Soul, Fables of Faubius, Tijuana Gift Shop, Pithecanthropus Erectus, Boogie Stomp Shuffle… It was all a joy. My incredibly picky quibble was that though they played two long sets and an encore – something I’ve not seen Playtime do before – I wanted more! Mingus has such a rich seam of tunes, they were bound to miss some favorites. (The opener from Ah Um, Better Git Hit In Your Soul, was one I’d have loved to hear! And Orange Was The Colour Of Her Dress, Then Silk Blues. And…)

Bancroft was great, somewhat more understated than he can be, really capturing the essence of Mingus’s longtime collaborator Dannie Richmond. Once Caribe had settled in, he did a fine job, not copying Mingus but praising him. Kershaw and O’Malley were excellent, too, The trombone bringing some extra tonal qualities to the quartet.

The encore was a quartet version of Nostalgia on Times Square, and with the bass it could have been a different tune: it was more swinging, and of course closer to the original, with Bancroft given greater scope to explore the tune. But it felt as if the necessity forced on the trio by the absence of the bass had made Kershaw and O’Malley a bit more creative too. It had certainly made them work harder!

But that is a minor quibble. This gig was everything I had hoped, full of exciting music. And I walked home singing my own, somewhat less tuneful version of “Nostalgia”…

I went back to see the last improvised performance of Running Under Bridges, a week after I saw the second. (I wish I had seen the first, too.)

This time, joining saxophonist (and co-creator of the project) Raymond MacDonald and guitarist George Burt was harpist Catriona McKay. Taking as their “score” the same images by Jo Ganter as before, with the same instructions and direction (and, indeed, some passages were recognisable between the two performances), it was a very different experience. 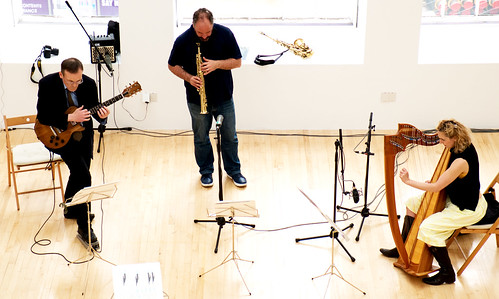 I can’t remember having seen an improvising harpist before, certainly not one playing steel bottle neck or tupperware on the harp. (There are a couple of jazz recordings I have which feature a harp, I think – one by Alice Coltrane, for instance.)

Having spent some more time looking at the exhibition of Ganter’s artworks and the images from which they were derived, as well as her fascinating animations of some previous performances of Running Under Bridges and a couple of improvisations by MacDonald and pianist Marilyn Crispell (a couple of videos are at the end of this post), it was easier to follow the way the musicians translated the abstract “score” into music – maybe to grasp what their process was. 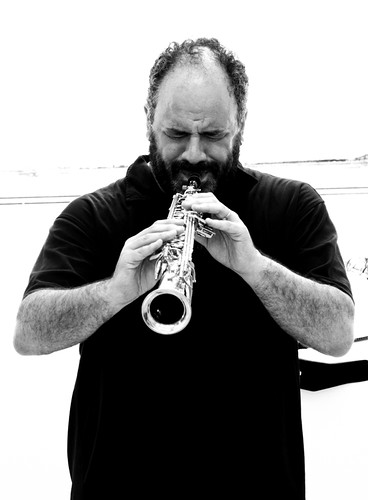 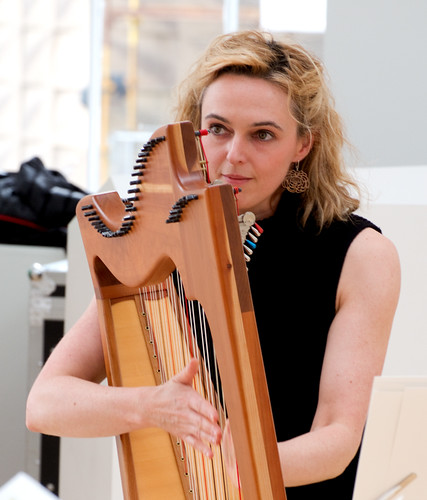 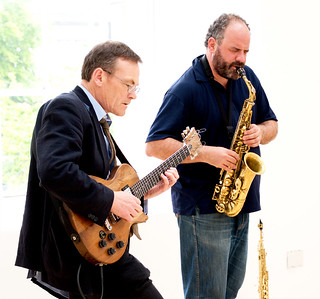 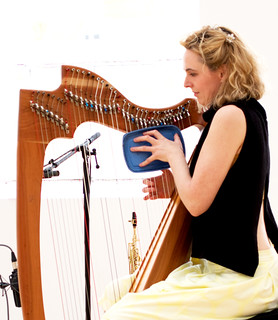 This performance felt more intimate, as if the audience was watching something very raw and personal going on. Like we were eavesdropping a private conversation between the musicians. There is an openness that improvisation brings to an event – shared by the audience, too, because we need to be open to experiment (and, at times, disappointment) – and you never know what is going to happen.