Aside from the John Taylor gig, I went to three gigs in the Glasgow Jazz Festival, all of which were in the City Halls’ Recital Room, a space I’d not been in before. It is a light, airy room with a high vaulted ceiling. It is quite an intimate space with, in this case, chairs arranged around tables. For all the gigs I was close to the performers, sitting in the second row from the front. It actually felt like a privilege being so close to the musicians.

In many ways, her performance was similar to Taylor’s a couple of nights before, reflecting their common influences (probably common to jazz pianists anywhere) – Ellington, Monk, Evans, maybe a bit of Jarrett thrown into the mix, too. She opened with a long exploration of an Abdullah Ibrahim number, and included another in her set, together with a beautiful rendition of Duke Ellington’s Single Petal of a Rose (one of my favourite tunes, so she couldn’t lose!), Monk’s Ruby My Dear, a couple of Bill Evans’ numbers, as well as several of her own tunes, often infused with traditional Bengali notes.

It was a lovely show; it felt like Rahman was sharing something with the audience rather than performing for us. She explained how every time she plays a new piano, it’s like building a new relationship, exploring the keys. She clearly bonded with the Steinway, and had a very creative connection!

Evan Parker, honoured by Edinburgh University the day before (together with George Lewis) played a concert with a somewhat slimmed down Glasgow Improvisers Orchestra. They played three improvised pieces, the first featuring Parker on sax, the second directed by Parker and the third a completely free piece. 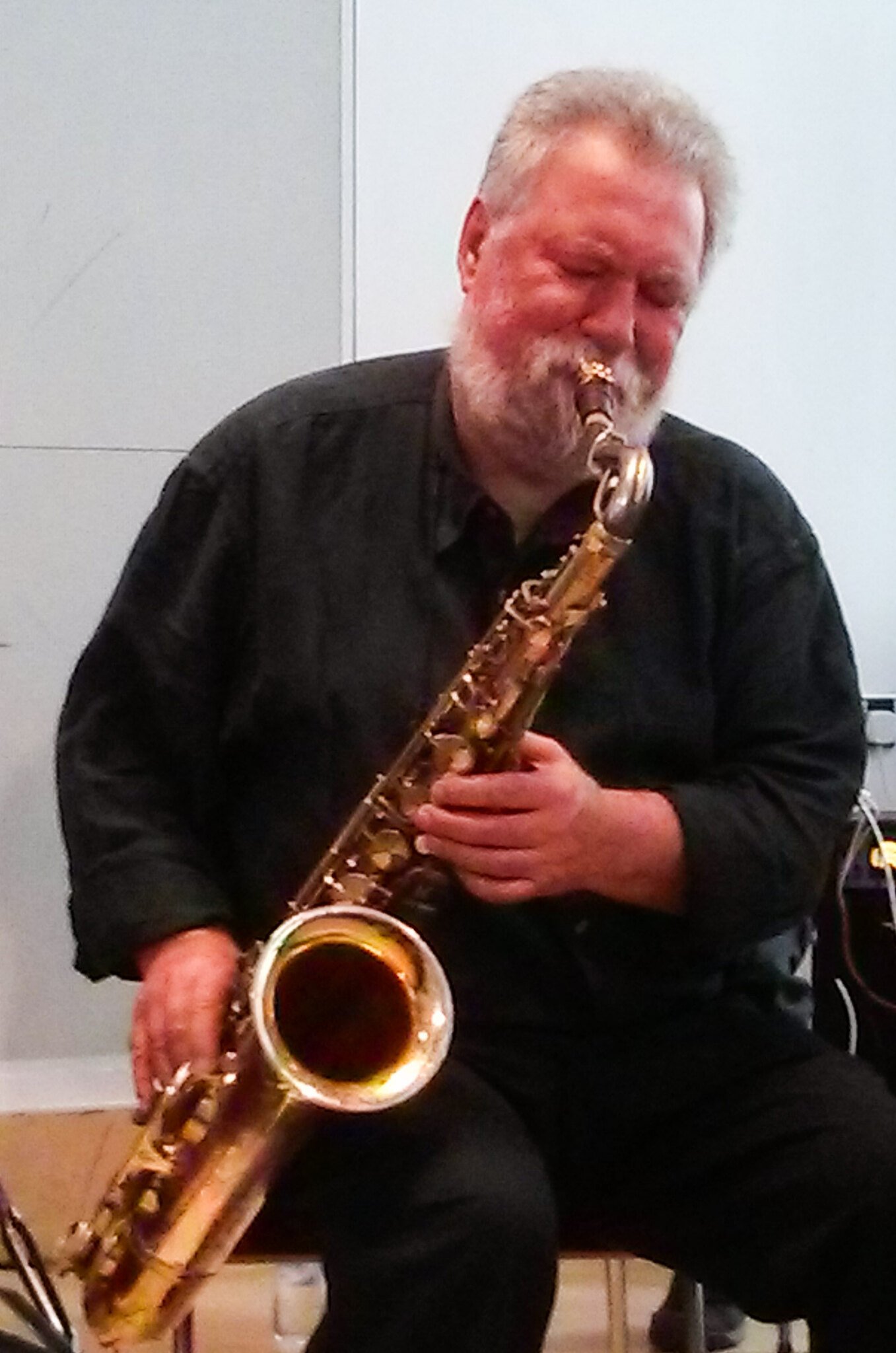 All three were very enjoyable. In the first and last piece, Parker’s playing was superb. He played a couple of long solos in the first piece. The band were good, too, Catriona McKay being inventive with her harp, and some lovely trumpet playing from Robert Henderson. The pianist (whose name I missed) did some inventive things with the inside of the piano, as well as using it as if tuned percussion (something both John Taylor and Zoe Rahman did, too. It must be something about that piano!). 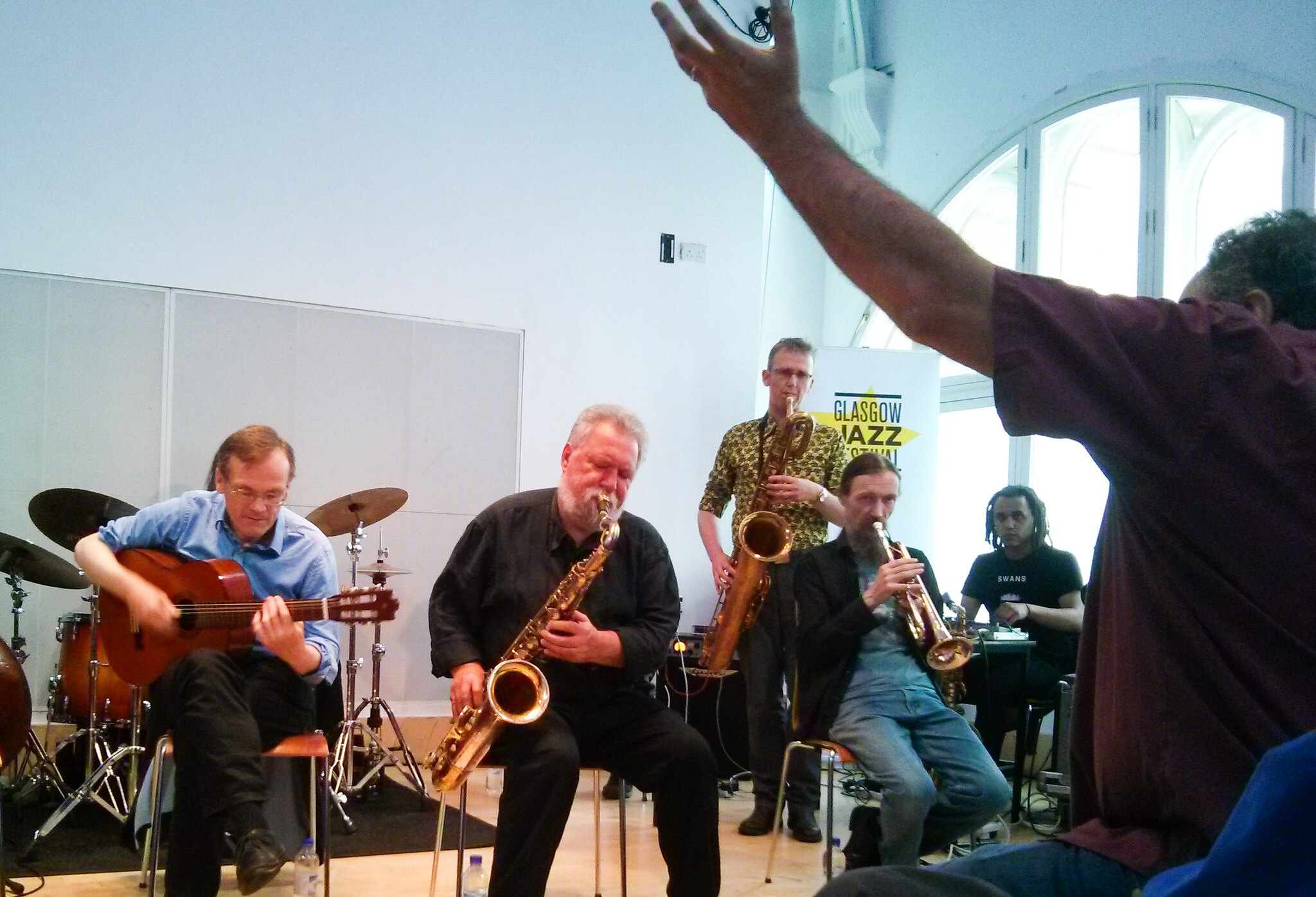 All in all, a very enjoyable afternoon of improvised music. And great to hear Evan Parker in Scotland!

You wait for a jazz gig with a harp and then two chime along on the same day… Following the GIO gig was a duet of
Calum Gourlay on bass and Cevanne Horrocks-Hopayian on harp. (The tickets and website called her simply Cevanne, maybe because they ran out of space on the ticket, or perhaps because it is easier to spell. I can use copy and paste, so I shouldn’t have that problem, though my spellchecker may disagree.) They played a set of mostly Ellington pieces, interspersed with some Monk, a piece by Johnny Dankworth, a couple of Armenian folk tunes (reflecting Horrocks-Hopayian’s origins). And some Hendrix, too.

Nothing if not eclectic, then, but they also presented a very coherent sound. I love Gourlay’s bass playing: great tone, wonderful feeling, and intelligent improvisation. He was very at ease with the Ellington repertoire, playing slower titles such as Solitude, Mood Indigo and African Flower, as well a couple of faster tunes in Caravan and It Don’t Mean A Thing.

Horrocks-Hopayian sang on some numbers, as well as playing harp. She has a strong voice, well-suited to the wordless tunes and the folk numbers. I liked her harp playing too, though occasionally it sounded more classical than jazz – a bit too “nice” for the blusier numbers.

The sequence dedicated to Jimi Hendrix was particularly interesting. Gourlay played a solo piece dedicated to Hendrix, predominantly bowed to suggest the wail of feedback, and then the bad and harp played a transcript of the wall of Hendrix’s flat in London: a friend took a rubbing from the wall on manuscript paper, and they edited the marks down to notes, and used it as the basis of composition. As a process, the starting point for music, it is a fascinating idea. Better still, the music they made from it worked, too.

Like many people, I have been saddened to learn of the death of pianist John Taylor. I saw him play in June, just three weeks ago. The bulk of this post was written, but not posted, and I thought it appropriate to update it in the light of Saturday’s news. 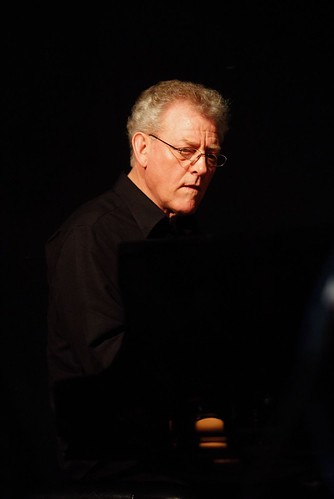 I was sitting in the front row of chairs in the Glasgow City Halls’ Recital Room, a small, intimate space seating maybe a hundred people, with a tall, arched roof.

Over the course of over an hour, I was enchanted. I watched Taylor’s fingers flutter over the keys, seemingly effortlessly. His performance was mesmerising, very engaging, moving the audience to somewhere else. It was contemplative, sometimes introspective music.

The room seemed full of music and ideas, a lovely experience. Much of the music Taylor played came from last year’s CD In Two Minds: he opened with his Ambleside Suite, played a very beautiful Reflections in D by Duke Ellington, which he said he first heard Bobo Stenson play, who heard it from Bill Evans – so, he explained, this was Taylor’s take on Ellington through the lenses of Evans and Stenson.

He spoke movingly of his friend and colleague Kenny Wheeler, playing a couple of Wheeler’s tunes. He described Steve Swallow as “such a nice guy, such a wonderful musician” before playing Swallow’s Vaguely Asian, for which he leant into the guts of the piano and beat out a gentle percussive rhythm, the strings resonating warmly.

It was a lovely concert. It felt like Taylor was letting the audience watch something very personal, and it was a privilege to be there. The thought that this was the last time I’ll be able to see him play fills me with sadness.

The recent death of free-jazz pioneer Ornette Coleman has lead to a lot of people reappraising his influence – which is vast, wide and deep. It was no surprise when the Playtime crew decided to dedicate an evening to his music.

I saw Ornette play a couple of times with his free-jazz-funk double quartet “Prime Time”, and I have long found his music easier to listen to live: it can be hard work on record, but in a live setting it works, for me at least. 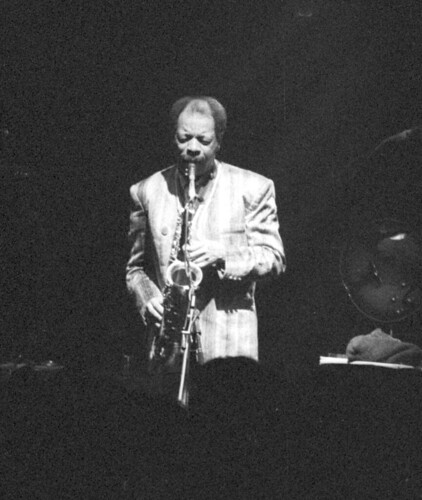 And the two sets the Playtime quartet played worked very well for me. I had wondered what altoist Martin Kershaw would make of Coleman’s music, since Coleman was one of the defining voices one the instrument. Despite the ostensible avant garde nature of the music, Coleman was deeply rooted in the blues, and that came through in the selections made in the repertoire by the band.

Almost wholly taken from his very productive, early period of the late 1950s and early 1960s – I think most of the tunes played came from Coleman’s first five albums – the connection to the blues was emphasised, as was the extension of Charlie Parker’s bebop lines in completely new directions. This surely came from Coleman rather than Kershaw: it’s in the themes and riffs, as well as the titles. (“Bird Food” was one of the tunes played.)

Coleman’s rhythm section – notably drummer Billy Higgins and bassist Charlie Haden – let him go in all the directions he wanted, by keeping great time. Here, Mario Caribe and Tom Bancroft admirably fulfilled those roles, showing the strength of the rhythm within the jagged melody. Graeme Stephen added lots of subtle flavours with his guitar.

But mostly it was. about the saxophone, which was gutsy and passionate – a fitting tribute.