Last July, during the Edinburgh Jazz Festival, I saw the Martin Kershaw Octet premiere a new, extended work, commissioned by the festival. I was very impressed but something didn’t quite work for me.

A couple of weeks ago I had a second chance to hear the piece, Dreaming of Ourselves. I’m so glad I gave it another hearing: it was a tremendous gig.

It was the same line up, and, I think, the same programme. Dedicated to David Foster Wallace, the first half featured a quartet of Kershaw on soprano, alto and tenor saxes (I kind of wish he’d added baritone just to get a full house!), Paul Harrison on piano, Calum Gourlay on bass and Doug Hough on drums, playing older tunes of Kershaw’s inspired by Foster Wallace’s writing. The second half featured Dreaming of Ourselves, a long, through-composed suite, performed by the quartet with the addition of Graeme Stephen on guitar, Sean Gibbs, trumpet, Chris Grieve, trombone, and Adam Jackson on alto sax. 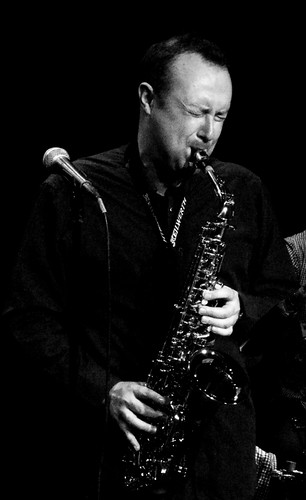 Martin Kershaw. Not at this gig. I didn’t take my camera!

It was absolutely magical. I’m not sure what had changed (and it might be something as trivial as the venue, or maybe even my mood!), but it seemed like the music took on a life of its own: the music was so much more than the notes on the paper and the eight musicians playing them. 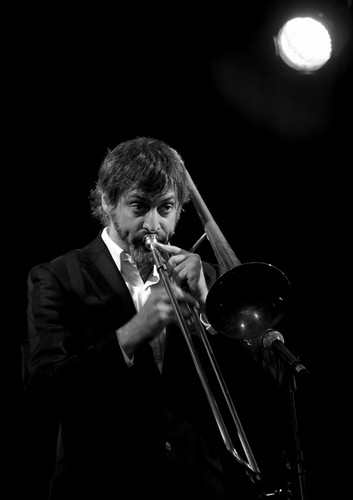 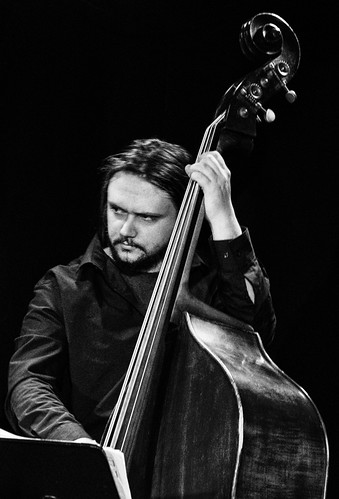 Chris Grieve (L) and Calum Gourlay (R).Not at this gig. I didn’t take my camera!

It had a great depth. There were carefully controlled sections, periods of chaotic freedom, improvised solos and moments of deep emotion and intensity. A bit like the way Kershaw described David Wallace Foster, in fact. None of the musicians seemed to hold anything back; they were all excellent (and frankly must have been shattered at the end!). The whole performance shone.

At the end of the gig, the audience was buzzing with excitement: the stranger sitting next to me turned to me and just said “wow!”

I bumped into one of the musicians later in the week at the SNJO’s gig (another superlative show – four of the musicians from the octet were in the SNJO that night) who said that they hoped to record the piece next year. So there’s that to look forward to!

(And kudos to Soundhouse for putting Martin and the octet on, as well as EJF for commissioning the work!)