I was fortunate to catch Ant Law play two gigs at the the end March. The first was in my local pub in Edinburgh, with a pick up band; the second, the following day, was with Trio HLK over in Glasgow. (I had the opportunity to see a third, when he played the Jazz Bar with another pick up band in between! But two gigs seemed sufficient.)

The Saturday afternoon slot at the Barony has become a regular thing, as they put on some of the top names in Scottish jazz, usually in a drummerless duo or trio. The band Law put together was a step up – a quartet with Callum Gourlay on bass, Sean Gibbs on trumpet and Doug Hough on drums. Gibbs and Gourlay are based down south, but I think they’d been playing Aberdeen Jazz Festival with Martin Kershaw’s octet and the SNJO.

Despite the all star band, it’s still a pub on a Saturday afternoon, with people stopping by for a pint and some lunch; and a fair degree of chatter. Which, in this environment, was fine, though some of the subtlety from Law and Gourlay’s playing might have been lost to the background hubbub. Gibbs trumpet was needle sharp and rose high above the chatter! 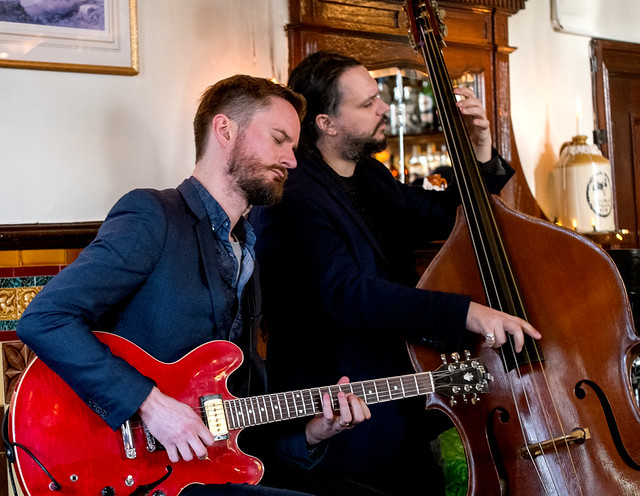 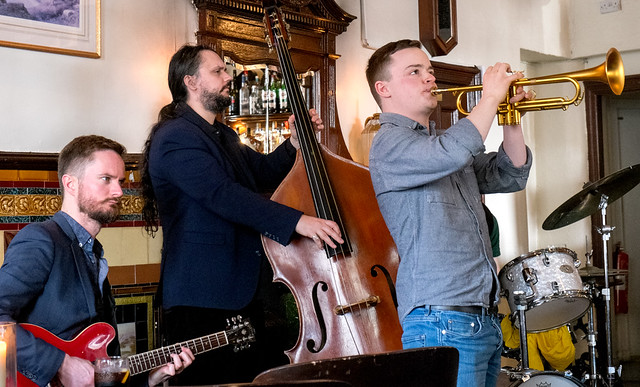 It was a fun afternoon. Not too taxing, they played a bunch of familiar standards – a couple of Monk tunes, some Ellington and Strayhorn. Good Saturday afternoon fare!

For the second set the quartet were joined by saxophonist Adam Jackson, another member of Kershaw’s octet, who’d been watching appreciatively from the bar during the first half. The combination of Gibbs and Jackson was excellent, and it was a joy to hear Law close up. 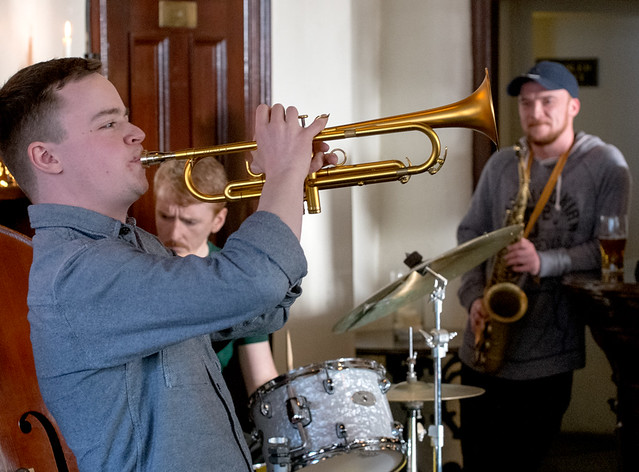 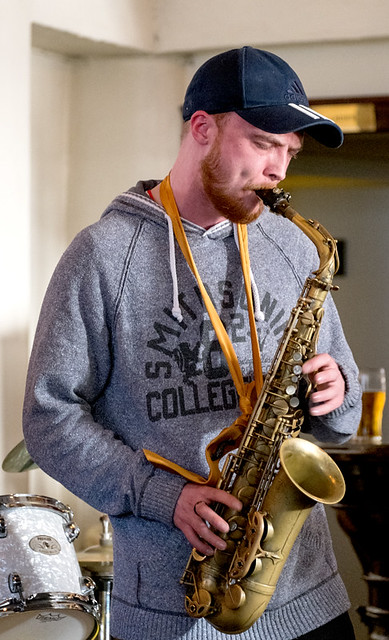 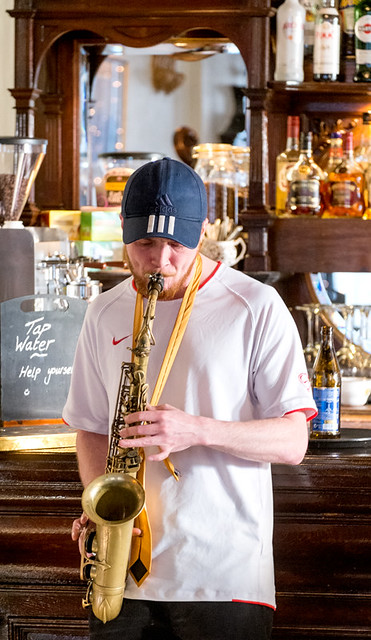 It occurred to me that I’d not heard Ant Law play standards before. But watching Trio HLK the following night corrected that misapprehension: it’s just that I’d never seen him play standards straight. Trio HLK’s tunes are largely based on standards – their album was even called Standard Time, although it is anything but. Pianist and composer Rich Harrold takes the well known and familiar, breaks them down – maybe even fractures them – and creates something totally new from the pieces. The music is complex and intricate, the three musicians (the third being drummer Richard Kass) weaving their lines together to stitch together a while new sound.

There is something very precise about the music: apart from the solos, it seems heavily composed and very thought out, though Law intimated that improvisation around fragments is essential to the trio’s creative process. For the most part, the originals on which they base their tunes are unrecognisable – at least to my ears. Smalls is apparently derived from Blue In Green (BIG – geddit?), but I couldn’t hear it. Similarly, Anthropomorphic, their take on Dizzy Gillespie’s Anthropology, seemed a long way from its bebop roots. One exception I’d TWILT, which was recognisable as The Way You Look Tonight before heading off in some unexpected directions.

But this doesn’t matter, because what they create is very compelling on its own account. The musicianship was of the highest order. All three were frankly remarkable. Kass’s ability to drop in and out of difficult time signatures (which I couldn’t even count) whilst changing tempo and yet be in precisely the right place to match a flourish on the piano seemed inimitable. The one tune that didn’t work for me was a new one, out for its first play – a take on All Blues which had a lurching rhythm, as if it was constantly about to fall over; but the rest were, for me, excellent.

The gig was very intimate, a small but perfectly formed and hugely appreciative audience within touching distance of the band. With Law seated behind a music stand and Harrold hidden behind his piano (at least from where I was sitting), Kass’s energetic but controlled drumming provided the only visual stimulus, although it was fascinating to be able to watch him so closely – he made it look easy (which I’m certain it wasn’t). The band were chatting to the audience during the interval and after the show – indeed, there was a fair bit of banter from the audience between numbers, too. The highly structured, precise nature of some of the music could appear cold, but the band were anything but: their warmth flooded the hall.