This was a gig that was could have been designed for me. My friendly local jazz night play music by one of my heroes – or maybe that should be anti-heroes, since he was quite irascible, getting into fights on stage (which lead to him being fired by Ellington) and breaking Jimmy Knepper’s teeth and embouchure. The one time I saw him play, at a festival in 1977 and several years before I got into his music, he spent half the set haranguing the audience for being white.

But when I did get into it – well, his music is something else. Working with limited resources, he managed to make his small bands sound like big bands, with tight but fluid orchestrations that really swing. He also wrote my all time favourite tune, Goodbye Pork Pie Hat, from one of my favourite jazz albums, Mingus Ah Um.

So it’s fair to say that I was looking forward to this gig. And I loved it.

The Playtime quartet started as a trio, because, ironically, bassist Mario Caribe was delayed. Still they had played gigs of both Bill Evans’ and Monk’s music without a piano, so playing Mingus without a bass should be a doddle. With guest trombonist Phil O’Malley covering the lower end of the scale and Martin Kershaw on alto the upper, driven along by drummer Tom Bancroft playing a stripped back rhythm to the beat flowing, they opened with Nostalgia in Times Square. As a trio they were remarkably effective and resourceful, Kershaw getting really low notes to mimic the bass during O’Malley’s solo.

Then Mario showed up and they really got going. Next up was Goodbye Pork Pie Hat, and then they spent the next two hours or so running through some of Mingus’s most famous repertoire. My Jelly Roll Soul, Fables of Faubius, Tijuana Gift Shop, Pithecanthropus Erectus, Boogie Stomp Shuffle… It was all a joy. My incredibly picky quibble was that though they played two long sets and an encore – something I’ve not seen Playtime do before – I wanted more! Mingus has such a rich seam of tunes, they were bound to miss some favorites. (The opener from Ah Um, Better Git Hit In Your Soul, was one I’d have loved to hear! And Orange Was The Colour Of Her Dress, Then Silk Blues. And…)

Bancroft was great, somewhat more understated than he can be, really capturing the essence of Mingus’s longtime collaborator Dannie Richmond. Once Caribe had settled in, he did a fine job, not copying Mingus but praising him. Kershaw and O’Malley were excellent, too, The trombone bringing some extra tonal qualities to the quartet.

The encore was a quartet version of Nostalgia on Times Square, and with the bass it could have been a different tune: it was more swinging, and of course closer to the original, with Bancroft given greater scope to explore the tune. But it felt as if the necessity forced on the trio by the absence of the bass had made Kershaw and O’Malley a bit more creative too. It had certainly made them work harder!

But that is a minor quibble. This gig was everything I had hoped, full of exciting music. And I walked home singing my own, somewhat less tuneful version of “Nostalgia”…

The only time I saw Mingus, 18 months before his death. When I saw him, I didn’t get his music at all: as a teenager into rock, it didn’t make sense to me.

Now, Mingus is one of my favourite artists. A genius. I just wish I had appreciated what I was privileged enough to see. 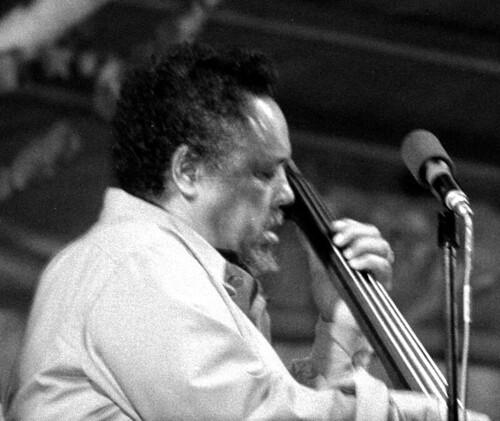 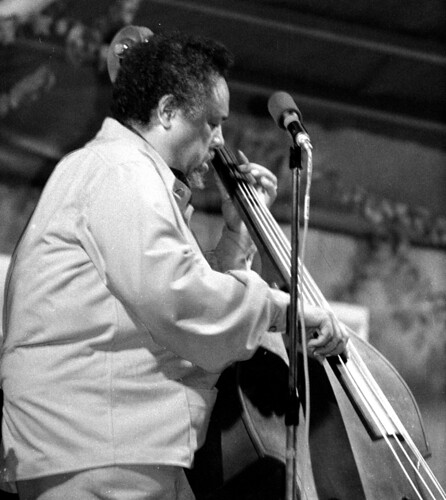 On the back of yesterday’s Radio3 programme on the Coltrane’s “A Love Supreme” and all the publicity over Selma, I have been listening to Coltrane’s coruscating track Alabama (and the album it is on, Live at Birdland).

It was recorded in October 1963, over a year before A Love Supreme, and it sounds like a sketch for some of the slower passages. Curiously, Ashley Kahn, in his book about the making of A Love Supreme, calls Alabama “dirge-like”, and doesn’t make any connection with A Love Supreme – at least, none that he comments on. (I checked in case I was stealing the idea from him…)

Maybe not dirge-like: maybe a lament. Because Alabama isn’t about Selma, Alabama, but Birmingham, Alabama. Where, in September, 1963 – just a month before Coltrane recorded Alabama – four children were killed when white supremacists fire bombed the 16th Street Baptist Church. Kahn says that Coltrane took a speech by Martin Luther King about the killing (which may have been the funeral oration) and made his saxophone voice the words – the rhythm and intonation, the phrasing; and the passion.

Trane did the same with his own poem, which became the final movement of A Love Supreme, Psalm.

The 16th Street Baptist Church killings are also referred to by Charles Mingus in his spoken word text to, confusingly, It Was A Lonely Day In Selma, Alabama:

before he goes into the poem, Freedom:

Presumably Mingus is first referring to the famous freedom march in Selma, which features in the film Selma, before he mentions the Birmingham killings.

It was a cold, gloomy evening before Christmas when I wandered to the relatively local King’s Head pub to see Chris Biscoe. The saxophonist is one of my favourite British musicians, and I reckoned if he were to play in my back yard, I ought to do him the honour of turning up and supporting him. (Some might call this “community”. I’m sure they’d be wrong…) I am very glad I did.

Firstly, the music was great: the quartet were playing the music of Charles Mingus and Eric Dolphy. I love Mingus’ music. Dolphy’s I find a lot harder: free-er, it isn’t music that I listen to at home; it requires full attention. Live, though, free jazz comes into its own. And this band played it very well. (As a measure of its freedom, most of Dolphy’s tunes seemed to include the word “Out”: I have “Out to Lunch” and listen to it often; I didn’t know “Out There” or any of the other Outs that were played.)

But secondly, I was glad to be there to support the music I love. Because when the band started, the audience numbered just six, including me. Only six people could be arsed to go out and here these great musicians play such brilliant music?

By the end of the evening, there were twenty or so in the audience.

I don’t know why so few people were there. It was coming up to Christmas, so people were busy. It was a grotty night – I nearly didn’t go out, so manky was the weather. It was a one-off jazz gig in a pub more famed for its comedy club. Who knows why else?

Frankly, that so few people were there made it feel rather special: there was no distance between the band and the audience. Jazz gigs are often low-key affairs where the musicians chat to the audience in the interval, but this felt like it was in my front room. (If my front room were a basement bar… Now that’s an idea!) I felt so strongly that I wanted to support the music that I bought Biscoe’s latest CD. And lots of beer. (Complete self-sacrifice, obviously.)

So: a great gig, bizarrely unattended.