These photographs confuse me. I have no recollection of the gig in the slightest, and I didn’t record the date. The backdrop shows the Queens Hall.

Tommy Smith said by email that he put the sextet together before recording Paris, which was released in 1992 – but that only adds to my confusion because I wasn’t living in Edinburgh at that time!

I can’t think how I could have forgotten such a good line up – Tommy, Steve Williamson and Julian Arguelles on saxes, Guy Barker on trumpet, Terje Gewelt on bass and, Tommy’s email said, Jason Rebello on piano. I think it looks like Ian Froman on drums behind Tommy in one of the pictures.

Trumpeter Colin Steele was in negatives on the same film; Tommy Smith says he’s never had Colin in his band, so I presume that Colin was providing the support. 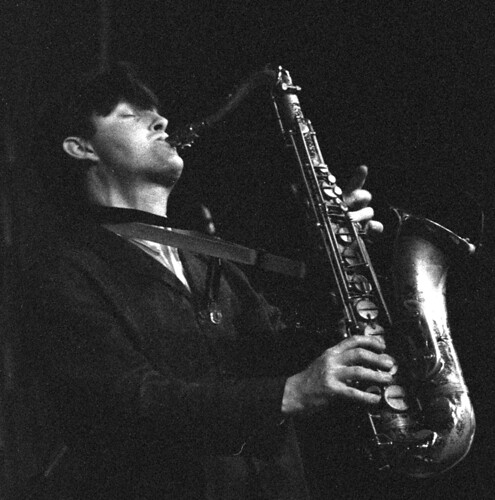 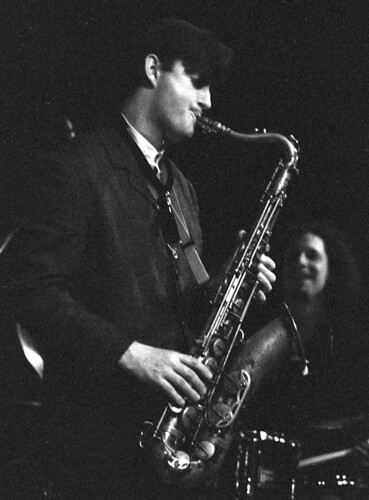 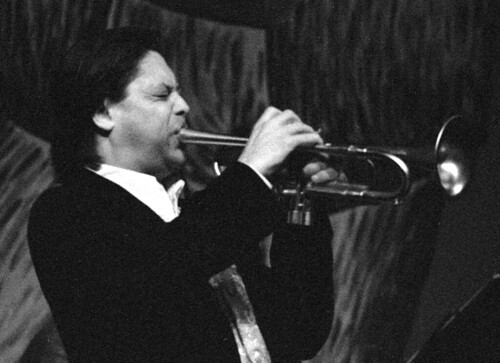 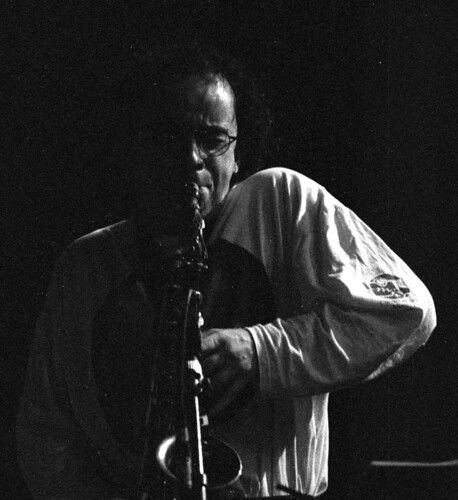 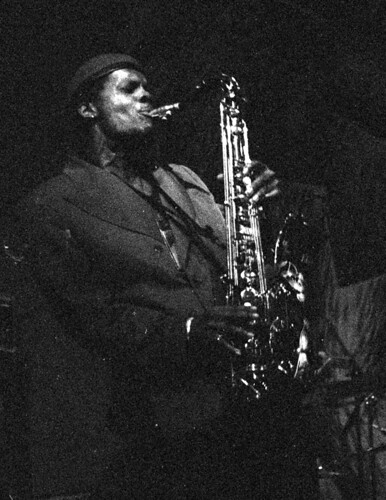 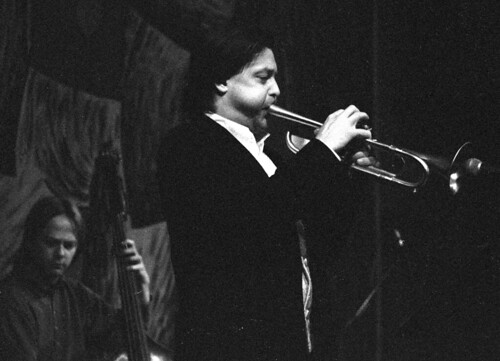 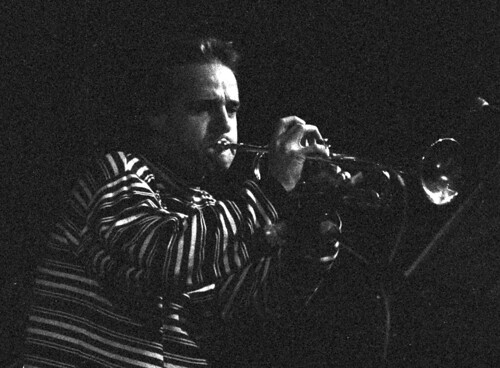 Over a month ago, I went to one of the best gigs of the year so far. I’ve been meaning to write about ever since, but other things seemed to get in the way…

The gig was Colin Towns’ Mask Orchestra, the final night of Ronnie Scott’s celebration of British jazz. The Denys Baptiste Quartet were on first, and they played an excellent set of new tunes – some fine playing by all concerned, with great solos by pianist Andrew McCormack and Baptiste. They played some very enjoyable music. Baptiste has lots of ideas and an interest in science and complexity: one number was called Fractal Realms, another Quantum Sax. Schrodinger’s sax, perhaps…

In some ways, though, it was a shame that Baptiste was supporting Colin Towns: as far as I was concerned, it was very much Towns’ night. Towns’ 18 piece Mask Orchestra were crammed onto the stage, with Towns conducting from the front row of the audience together with some of the saxes.

It was an all-star band, featuring some of the best of British jazz, including Guy Barker and Henry Lowther on trumpets, and Alan Skidmore, Nigel Hitchcock and Julian Siegel on saxes. Siegel played a lot of baritone, producing a beautiful tone.

Towns writing and arranging is unique – the rich soundscapes he creates sound like no other composer: the standard yardsticks for big band writing don’t apply.

Much of the set was taken up with a suite based around themes from Kurt Weill – lots of “Mack the Knife” and “September Song”, but twisted and bent by Towns. He told a story about how he’d missed a call from his mentor, and by the time he could get back to him, Johnny Dankworth had died; he dedicated the suite to Dankworth.

The band made a glorious sound, lots of brass and saxes. On a hot summer’s evening, this was powerful music: the band gave it their all. Through it all, Stephan Maass’ energetic percussion powered away, bring a strand of continuity.

A rare outing for Towns’ orchestra, and a truly great gig.

I’ve been to several jazz gigs in the last month or so that I haven’t done anything with yet. I was going to write about one for LondonJazz, but by the time I got around to it, it didn’t make the cut. None of these gigs set the world on fire: they were good, but…

First up was Sun Ra’s Arkestra. Not Sun Ra himself – he died seven years ago; or, if you believe his mythology, he returned to Saturn; no, this was the Arkestra led by alto player Marshall Allen. They’ve played in London a fair bit over the last year, quickly selling out every gig: I only managed this one because it was part of a special, extended run which I noticed on Twitter: the Arkestra had been due to play a couple of gigs at Café Oto, and been unable to move on because of the volcanic ashcloud. So they played another gig, and then another, and another, hoping to pay their way – stuck in London, they had to eat and pay their hotel bills.

So I saw them on what was, I think, their fifth night at Café Oto in Dalston. I’d not been there before: apparently it has been described as one of the coolest places in London (or possibly Europe – I can’t find the reference!) but that isn’t how it appeared. No stage, a random selection of chairs, it had the air of a village hall. When I got there, most of the chairs had gone – I sat right at the back, on a bench – and people kept arriving. By the time the band came on, an hour later than advertised (perhaps they were still on Saturn-time), it was packed.

This version of the Arkestra was a septet: a front line of four saxophonists/percussionists, and a trumpet player, drummer and guitarist/bassplayer. I was expecting great things – the Arkestra have a reputation for playing some formidable, funky space-jazz (true, not a crowded genre), but having seen two other superlative bands playing Sun Ra’s music in the last few months – Orphy Robinson’s Spontaneous Cosmic Rawxtra and Jerry Dammers’ Spatial AKA Orchestra – the Arkestra seemed a bit flat. Maybe they were tired (I certainly was!), or homesick, or… Whatever, I’d say they were good but lacklustre: I expected more. I enjoyed the gig, particularly the humour they brought – these were serious musicians bringing some fun to the gig. But they weren’t great, whatever everyone else was saying.

The following night I went to see the Stan Tracey Octet. Tracey is one of the grand old men of British jazz: even his website describes him as the “godfather of British jazz”, an apt moniker and one of which he seems justly proud. His current octet features three generations of British players, with a front line featuring survivors from the 1980s jazz revival such as Guy Barker on trumpet and Dave O’Higgins on saxes as well as relative youngster Simon Allen on tenor sax.

Tracey plays in a variety of formats – in the past couple of years I have seen him play solo, in piano duet, in a quartet and leading his glorious big band. His octet fits right in the middle, producing a suitably rich sound for Tracey’s Ellingtonian compositions. These two nights at the Pizza Express – rapidly becoming one of my favourite London venues – saw the launch of Tracey’s latest CD, “The Later Works”, and all the numbers played were from the CD’s two suites. Guy Barker was on great form throughout, playing with verve and energy; Dave O’Higgins also played powerfully, with some great solos on soprano as well as tenor.

Stan played some lovely, thoughtful solos, too, though he seemed to keep a fairly low profile. His long standing rhythm section of his son Clark on drums and Andrew Cleyndert on bass kept things swinging along, with a couple of energetic solos from Clark.

Finally, last week saw guitarist John McLaughlin grace London. I’d not seen McLaughlin – one of electric jazz’s great – play before, so I thought I’d take the opportunity. His quartet featured Mark Mondesir on drums, another survivor of the 1980s jazz revival, and one of my favourite drummer: I hadn’t seen Mondesir play for many years, and he was the main draw. Multi-instrumentalist Gary Husband played (mostly) keyboards, and bassist Etienne Mbappé completed the quartet.

Once more, this gig was something of a disappointment. It was all a bit soulless, something I’d not expected from McLaughlin – much of his music has been rooted in eastern spirituality, though not this quartet. It was technically excellent, and went along at a cracking pace, but I found it very unconvincing.

Husband played some great piano, but he also made some electronic farting noises which added nothing. He sat down at the drum kit to play a couple of drum duets with Mondesir – and added less than nothing. His drumming was good, and the interplay between him and Mondesir was good, but frankly drum solos are boring, and drum duets doubly so. Mondesir is more than capable of holding his own, and Husband’s interventions didn’t add any more rhythmic interest – so why bother hauling an extra drum kit around? It just felt like showing off – good theatre, perhaps, but not great music.

McLaughlin and Mbappé got a good groove going – Mbappé laying down some funky lines – and Mondesir was great, but all in all I felt the music lacked something.

Tuesday saw the tribute to Ian Carr, who died last year. It gathered together musicians who had worked with Carr in various bands from the 1950s on, playing his music.

It was an eclectic evening, reflecting the depth of Carr’s interests and influence – he was an educator and writer as well as a player (he wrote one of the definitive biographies of Miles Davis, and I attended a big band workshop he ran once in Edinburgh about ten years ago).

Julian Joseph was the compere for the first half, and he spoke warmly of Carr’s influence on him through regular weekend music schools. Then Nikki Yeoh took to the satge and played a couple of pieces she dedicated to Carr. These pieces seemed a little knowing – deliberately complex in their form, lots of changes in tempo – but they held the audience’s attention.

Then came the Michael Garrick sextet, featuring musicians who had played with Carr in the 1950s and 1960s. Garrick was the pianist in the seminal Don Rendell/Ian Carr quintet, and Rendell himself came up for a few numbers at the end of the set. Rendell looked quite old (he must be in his seventies) as he walked on stage, but with his saxophone playing he could have been one of the young turks – the music sounded fresh and contemporary.

There was a clean simplicity to many of the numbers; at one point, Garrick accompanied a poet with a simple two chord backing, before the band came in to fill the sound out. Norma Winstone sang to several tunes; normally I don’t get jazz vocals, but here her words fitted perfectly. Dave Green on bass held it together really well: there was a solidity to his playing.

This was a great set, summing up the post-bop milieu of the band’s 1960s heyday. Henry Lowther took the trumpet chair, doing justice to Carr’s memory.

After the interval, Kevin Whately – perhaps better known as Inspector Lewis – spoke about Carr’s connection to north east England, before Guy Barker on trumpet and Tim Whitehead on reeds were joine by a string orchestra to play Carr’s Northumbrian Sketches. This suite was superlative. Normally, I don’t like strings in jazz: too many syrupy, sentimental arrangements. This suite is one of the exceptions. There was nothing sentimental here: the arrangements merged the two disciplines of jazz and strings exceptionally. Barker’s playing was excellent, as was Whitehead. The suite seemed magnificent: the writing had depth and subtlety, creating a spiritual mood of remembrance. There is a real folk feel to some sections, the strings at times producing sounds reminiscent of the northumbrian pipes. It was a wonderful performance.

After the sketches, Nucleus seemed a little – well, ordinary. This was not what I had been expecting: I have several Nucleus disks, and ordinary isn’t the way I’d describe them. Carr was one of the innovators who created jazz-rock, but unlike any of the other music in the evening, this sounded rather dated. The performance was good – the playing seemed fine – but a bit of a let down after what had preceded.

Until, that is, John Marshall came on for the last half of the set. His playing seemed to energise the others in the band, and suddenly they were playing better: they all stepped up several gears. Nic France, who moved from drums to percussion when Marshall arrived, had been doing a great job – but Marshall just propelled the band into a different league. They seemed like a different band. The last few numbers powered along, pushed by Marshall’s excellent drumming. The evening ended on a yet another high.