I reviewed this gig for the LondonJazzNews blog; here are some photos I took, too. 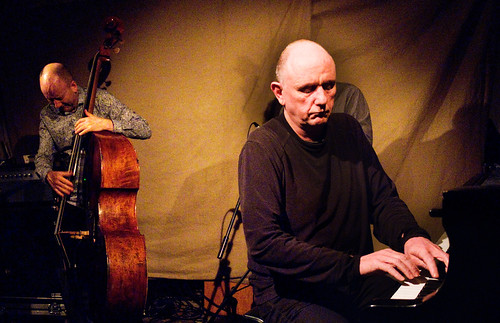 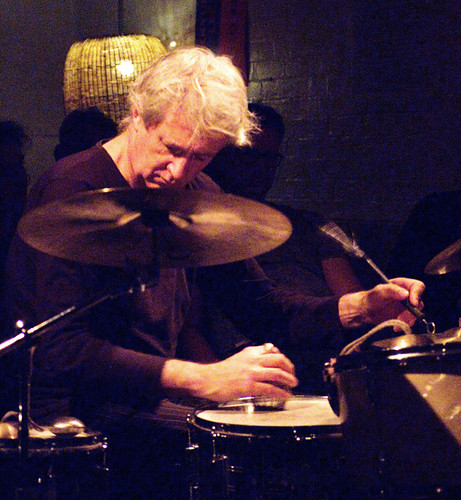 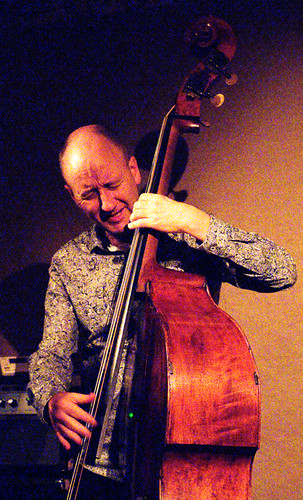 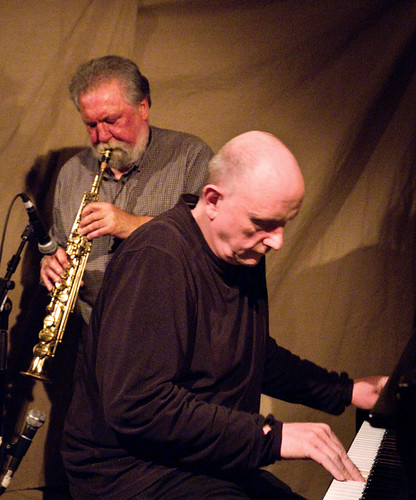 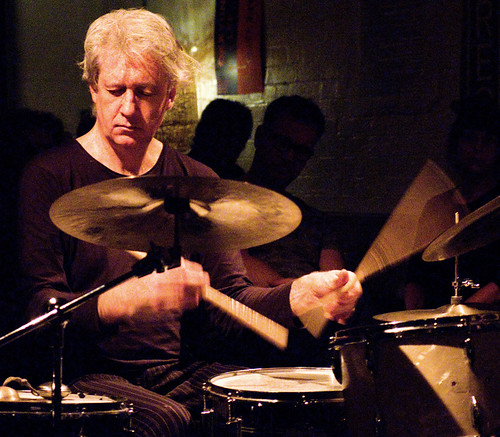 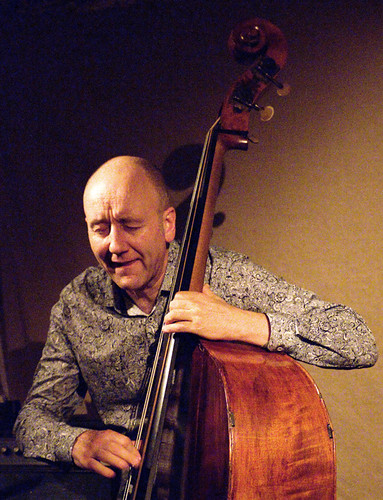 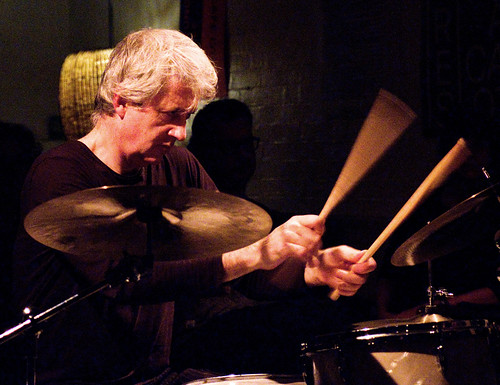 I reviewed the Magnus Ostrom Band for the LondonJazz blog. Here are are some pictures I took at the gig. The last day I took advantage of more free music – in both senses of the term. There was a triple bill down at the Festival Hall – or, at least, I saw three bands… The first was a trio of Steve Lawson on bass, Otto Fischer on guitar and Tony Buck on drums. This trio didn’t grab me much – it seemed a bit like they were each playing their own thing without adding to each other; perhaps I couldn’t just make sense of it.

They were followed by Shabaka Hutchins on clarinet, Tony Bevan on sax, Phillip Barre on bass and Tom Skinner on drums. This grabbed me much more – Bevan and Hutchins played some fiery solos, Barre and Skinner pushed things along. This was much more exciting.

Best of all, though, was Orphy Robinson’s Cosmic Raw Xtra Four. I saw Orphy’s Cosmic Raw Xtra big band last year, and that was a brilliant gig. This quartet was quite different: with Lawson on bass and Fischer on guitar, and the great Steve Noble on drums, Robinson created some amazing music. It was a step above the rest – brilliant vibes and steel pan from Robinson, and energetic drums from Noble. They were all together: they played as a unit, not four individuals. It was a really exciting end to the festival.

The Bad Plus were playing a three-night LJF residency at Kings Place, one of the more original bits of programming during the festival. They did one night on their own, one night with singer Wendy Lewis (which had excellent reviews on Twitter!) – and the night I saw them, with Django Bates. This was one of the gig I must post in the “good but disappointing category”: I’ve seen the Bad Plus play many times, and I was looking forward to hearing their augmented quartet tackling some of the tunes I love; what I got was ninety minutes of, I think, wholly improvised music. Some of it was inspired, some very good, but a fair chunk sounded self indulgent, too. A bit like they were trying too hard. Pianist Ethan Iverson seemed to take a backseat to Bates – Iverson seemed very reticent, as if he wasn’t wanting to get involved in the music. Bates pushed forward, with Bad Plus bassist Reid Anderson and drummer Dave King being as inventive as I expected. I wanted more Iverson, though.

Monday night at LJF was one where my high expectations weren’t fully met. It started with John Scofield in a trio with bassist Steve Swallow and drummer Bill Stewart, his regular rhythm section. (Last time I saw Swallow play, it was with Andy Sheppard…) They played a mixed set of standards and Scofield’s tunes – a couple of their standard ballads were exquisite – and all three were excellent. The disappointment came with the second set, which matched Scofield with the Scottish National Jazz Orchestra – and only because I was really looking forward to it! Playing arrangements of Sco’s tunes and some from his time with Miles Davis, it felt at times as if Sco and the SNJO were pulling in different directions – as if Sco’s loud guitar was fighting with the orchestra. Knowing both Sco and SNJO’s music, this seemed like such a waste: Sco’s record Quiet has some beautiful, haunting brass arrangements, and those commissioned by SNJO didn’t really match up.

There were some great moments – Ryan Quigley on trumpet, Martin Kershaw on alto and Alyn Cosker on drums all played good solos, and Tommy Smith, SNJO’s director, was on his usual fine form, but this was just a good rather than great gig.

The London Jazz Festival finished last weekend, and seven days on, it seems like a good time to take stock. I went to nine paid-for gigs, two free gigs which I had planned to see, I caught a couple of free gigs which I hadn’t planned, and a couple of other free events. I had a busy ten days – possibly too busy: it felt like trying to cram six months’ live jazz into ten days – and many clashes: the curse of the festival. I had to chose what music to miss as well as what to see.

I deliberately experiment with LJF: whilst I go to some gigs where I know the musicians’ work (and expect to enjoy the gig), I also seek out people I haven’t seen before or who are doing things I haven’t heard before. I also seek out artists I’m unlikely to get a chance to see at other times of the year – this means that my selection is skewed towards foreign “big name” artists rather than London-based musicians. (Though I have long decided not to see artists just because I think they are likely to die: I saw Art Blakey the year before he died for this reason, and I wish I hadn’t – he was a shadow of his former self, and that’s not how I want to remember my heroes.)

All in all, then, it was an eclectic mix of musicians and styles over the ten days.

I started off with Manu Katché. Part of the festival’s French programme (there was a fair bit of jazz nationalism this year: there were French, Danish and Scottish streams – it somehow seems a bit against the grain to me, since I see jazz as an inclusive art form, encompassing peoples regardless of race or origin), he played with a quartet with saxophone as the lead instrument. Though Katché is a drummer, this wasn’t a drum-heavy sound, but it somewhat lacked the full balance of his recorded work. His drums sounded great from the back of the Royal Festival Hall – a rarity, since they are often mixed to mud in large halls. I enjoyed this set, but I didn’t think it was great music.

I think I shall have to come clean right up front. This was my gig of the London Jazz Festival. I hadn’t expected it to be – I thought it would be good, and I like Carla Bley’s, Steve Swallow’s and Andy Sheppard’s playing – but I didn’t think it would be that good. And then better still.

So now I have to justify this: just what was it that made it so good? I think it was because Bley, Swallow and Sheppard – who with drummer Billy Drummod make up the Lost Chords (great name, great band…) – were all playing at the top of their game, and seemed to understand each other perfectly. Bley, Swallow and Sheppard have been playing together as a trio for many years – the lovely album “Songs With Legs” dates from the early 1990s – and this quartet has been playing together for five years or so. They seem to have developed a creative intuition, the whole very much greater than the sum.

In the pre-concert talk, Bley said that she didn’t think much of herself as a pianist. She did herself a disservice: she was excellent throughout this concert. Her playing is very understated: several times during the set, I was reminded of Thelonious Monk’s playing. The Lost Chords opened with a long, almost-suite based on (believe it or not) Three Blind Mice – but that that’s three blind mice as if imagined by Monk. Bley makes every space and pause count.

Later on, the band played an arrangement of Monk’s Mysterioso, where Bley had laid her own tune over the basic melody, producing a wholly new composition.

It was the first time in a long while that I had heard Andy Sheppard – indeed, I think the last time must have been with Bley and Swallow about ten years ago in Edinburgh. His playing was a revelation: his playing has great confidence. He plays with a very clean tone; Bley said earlier that she first worked with Sheppard because she wanted a saxophonist who didn’t try to sound like Coltrane, and whilst he must have been influenced by Coltrane, he has very much his own sound. He played tenor and soprano – he played lots of very long notes on soprano (circular breathing, I’d guess) when other sax players would have seen how many different notes they could squeeze. Sheppard’s minimalist approach was perfectly in keeping with Bley’s piano.

Swallow is another of Bley’s long-time collaborators. His electric bass playing was very fluid and melodic, becoming a third lead instrument and duetting with Sheppard. Drummond did exactly what he needed to, sometimes being subtly sensitive, others energetic and driving.

There was another feeling I got throughout the concert: I kept hearing echos of Gil Evans. This surprised me, since Evans’ arrangements for big bands are on a very different scale to the Lost Chords quartet. But Bley has done much of her composing for many big bands – her own, Charlie Haden’s Liberation Music Orchestra, way back to George Russell’s orchestra nearly 50 years ago. Seeing her big band play Hackney Empire in the early 1990s (I think this was an edition of her band called the Very Big Carla Bley Band), I recall she said that the arrangement of Goodbye Pork Pie Hat was borrowed from Evans. Swallow co-produced and played on John Scofield’s beautiful album Quiet, and Scofield’s horn arrangements on that always make me think of Gil Evans, too. Joining things up, Sheppard played in Evans’ European touring bands.

This concert was a joy from start to finish, the first finish being another short suite, Lost Chords, the second being a beautiful, slow and mournful encore Útviklingssang. Throughout the concert the music had depth, emotion and delicacy. It was simply gorgeous.