It wasn’t planned, but several of the gigs I went to in this year’s Edinburgh Jazz Festival celebrated musicians or their records: The Birth of the Cool; Thelonious; Coltrane; Dizzy and Bird; and this gig, in which John Rae lead a band paying homage to Mingus and specifically his 1959 record, Mingus Ah Um.

Mingus Ah Um has long been one of my favourite records: it was the first jazz LP I had, a gift from my father one Christmas (I’d asked for some jazz, not knowing what records specifically to request; as well as Mingus, he gave me a Miles Davis Quintet double, Relaxin’ / Workin’, a live Ellington record, and Benny Goodman Live At Carnegie Hall. I didn’t like the latter, and still don’t, but loved the rest).

So of course I had to see Rae, back in Scotland for some gigs, and a pick up band play Mingus. Rae was joined by the very excellent Phil Bancroft on tenor, who brought his own anarchic energy to the gig, a necessary ingredient to Mingus’ music; a couple of bassists to ensure sufficient Mingusicity, Patrick Bleakley and an American player whose name I didn’t get (many apologies if that was you!); and two more guests from the States, Shea Pierre on piano and a trombonist who I think was named David Hawkins (but I can’t verify that, so I might have got it wrong). 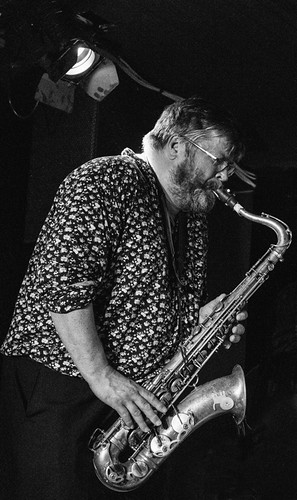 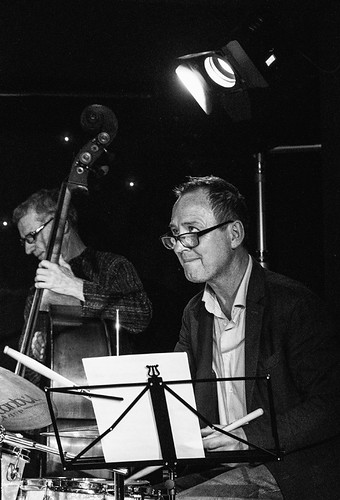 They played a few tunes from Ah Um, starting off with a superb Better Get Hit In Your Soul, and later Pussy Cat Dues, but they played a variety of Mingus numbers, mostly well known – Tonight At Noon, Peggy’s Blue Skylight, Remember Rockefeller At Attica – and a couple of less well known pieces – Opus 3 and Canon.

Canon was a slow, bluesy melancholic number – and a canon, the instruments seeming to chase each other along extended lines. The band managed to achieve that Mingus sound, making a small band feel a lot bigger than it actually was. Hanging two bassists helped, with one keeping the band swinging whilst the other added little touches and emphasis, or a solo. 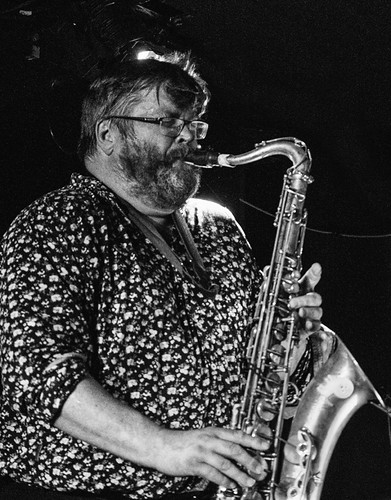 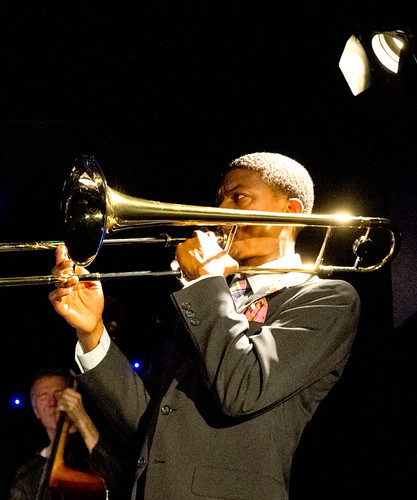 They closed with an energetic Boogie Stop Shuffle, from Ah Um: a great way to finish a tribute to a wonderful album and a truly great musician.

I saw Ryan Quigley play two gigs during the Edinburgh Jazz Festival: the first a quartet, the second a quintet. The quartet gig was with Brian Kellock (one of many unsung local heroes) on piano, Kenny Ellis on bass and John Rae in drums. I had thought it was just going to be Quigley and Kellock playing duets – and they started the second set with a few exquisite pieces, just the two of them – but the quartet was great, too: a very enjoyable evening of standards. It was a real pleasure to hear them play familiar tunes – Softly As A Morning Sunrise, Caravan, Moanin’ (the Benny Golson / Jazz Messengers’ tune, not the Mingus one), Cherokee – spot on swinging bebop. The Quigley-Kellock duo played a mesmerising and rather apt Cheek to Cheek, Quigley standing beside the piano and blowing without amplification. 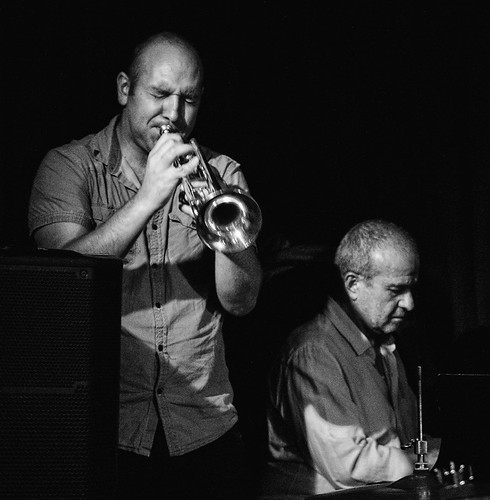 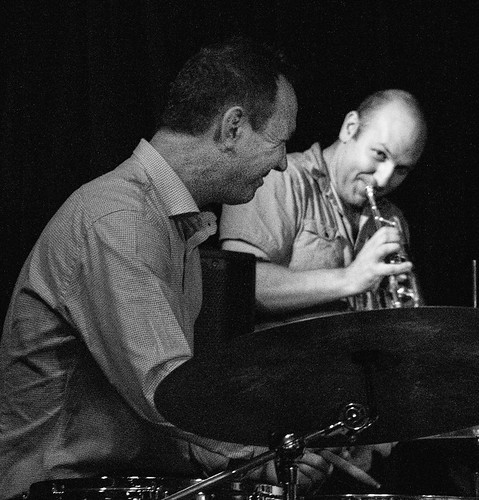 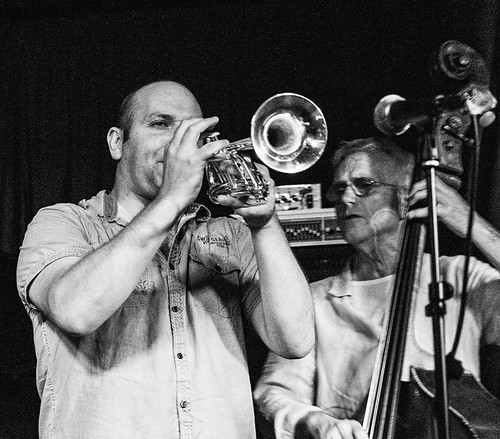 The quintet gig was more bebop: dedicated to the music of Dizzy Gillespie and Charlie Parker. With Quigley amply qualified to take the trumpet parts, the real joy was his guest standing in for Bird: Soweto Kinch. I’ve seen him play his own music a few times, but never tackling hardcore bebop tunes like these. I knew he could play, but he owned these tunes: he took to these numbers like a Bird to water. 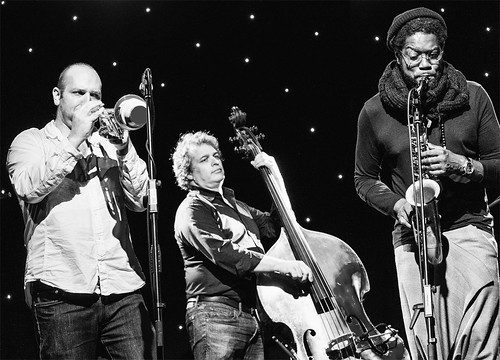 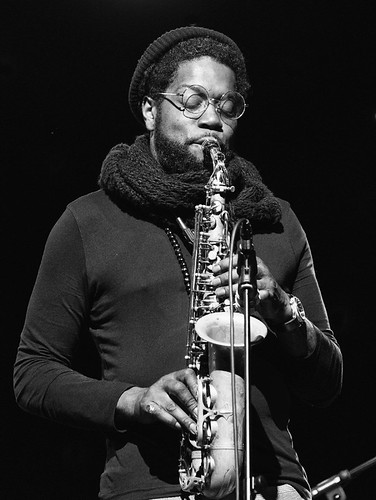 This music, though decades old, still has the ability to excite. They tore through tunes such as Hot House and A Night In Tunisia at great speed, Kinch showing how dexterous he is. The rhythm section – Mario Caribe on bass, Alyn Cosker on drums and Alan Benzie on piano – were equally at home with this material. Another hugely enjoyable gig. Boptastic! 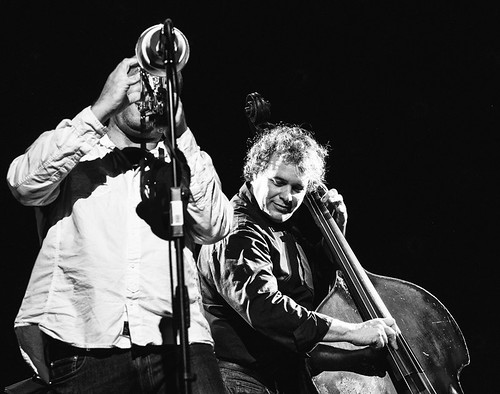 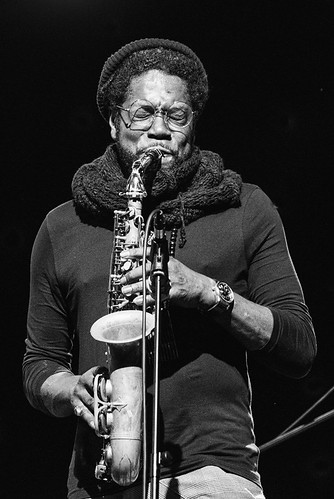 As opening statements go, it was pretty definitive: a short introduction from Calum Gourlay’s bass and then the whole quartet roared into the Resolution, the second part of John Coltrane’s “A Love Supreme”. Many people consider A Love Supreme to be one of the most important pieces of music of the twentieth century – me included. It is a work of passion that communicates a deep spirituality. It is a piece that is rarely played by other musicians, despite it being hugely influential: it seems almost sacrilegious to do so.

So for Tommy Smith and his quartet to start their concert celebrating Coltrane with Resolution, full of energy and passion themselves, controlled and forceful, clearly marked the territory. 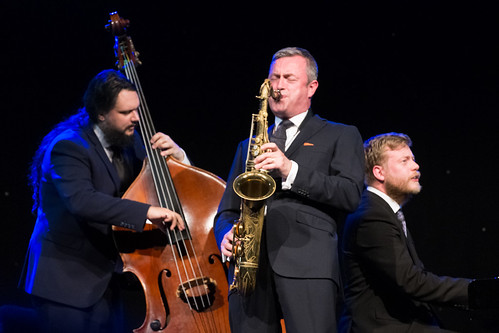 On the hottest night of the year, the theatre was full, and sweltering. On stage, the band wore suits and ties, buttoned up, and kept their high energy approach going the whole time. Like many (most?) tenor players, Smith has long been influenced by Coltrane: as a young artist, he recorded Giant Steps on his first album, and he regularly included numbers by Coltrane in his live sets. He directed, and played tenor (together with Courtney Pine) with, the SNJO playing Coltrane a few years ago. He has an affinity with Coltrane’s music. 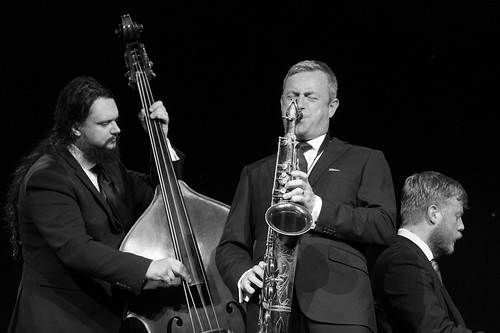 Playing with a line up guaranteed to bring to mind Coltrane’s classic quartet, and on this night apparently playing entirely acoustically (no mikes to be seen – though I’d be surprised if the bass wasn’t miked), Tommy Smith made a glorious sound. The band were superb. Peter Johnstone, a relative youngster, must have been channeling McCoy Tyner, laying down thick chords and searing solos. Sebastiaan de Krom was both light and loud, letting rip enough to do Elvin Jones justice; and Calum Gourlay, in the fourth gig I’d seen him play in four days, just gets better and better.

Smith explained that they were playing music from their latest CD, Embodying the Light – and I think they played the whole thing: three compositions by Smith, five by Coltrane, and ‘Trane’s arrangement of Summertime. It was powerful music – pure Smith, but pure Coltrane too. It was hugely exciting – exhilarating, even. It was a full blown experience, a bit of a roller coaster – aside from Naima, it was all pretty full on – and every bit as exciting. Wonderful stuff. 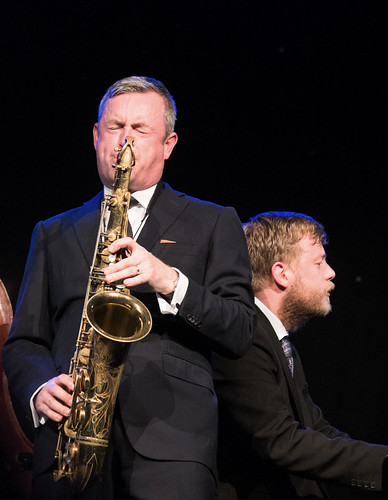 “The Birth of the Cool” was the first jazz record I bought, over thirty five years ago. It’s not my favourite jazz record – it’s not even my favourite Miles Davis record, not even in the top ten – but it is one naturally has a special place in my heart. So when I saw a project to put together a band to play the album in its entirety live at Edinburgh Jazz Festival, it was a gig I had to go to.

And a very special occasion it was. 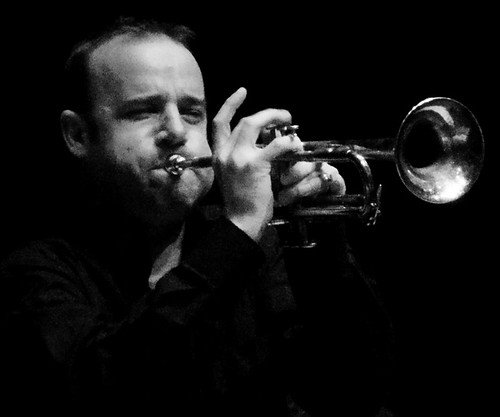 Colin Steele – not at this gig, but he looks the same!

The trumpet seat was filled by Colin Steele, at competitively late notice, apparently; Martin Kershaw was on alto and Allon Beauvoisin was on baritone. The other musicians making up the nonet were a younger generation: Alan Benzie on piano, May Halliburton on bass, and a trombonist, drummer, tuba and French horn players whose names I didn’t get – though it was pointed out that even the younger players were older than Miles Davis, Lee Konitz, and Get Mulligan when they recorded the original. The whole thing was directed by Richard Ingham, who didn’t so much conduct as dance around the rhythm.

Recreating a historical record could easily slide into kitsch, but one faux radio announcement aside, this performance moist certainly didn’t. The music sounded lively and fresh, bouncy when it needed to be. It no longer has the capacity to surprise (as it once must, the first of Miles’ three big innovations), but it was a particular joy to be able to hear such familiar music live.

The following night saw Steele lead his own quartet, playing the music by the band The Pearlfishers, which they’ve recorded on the recently released CD “Diving for Pearls“. He might not have written the music, but Steele and pianist and arranger Dave Milligan made it totally their own.

Steele said that he didn’t think hit his stride till the second set, but it didn’t show. Playing with a battered mute throughout, close into the mike, he was enthralling and beguiling. 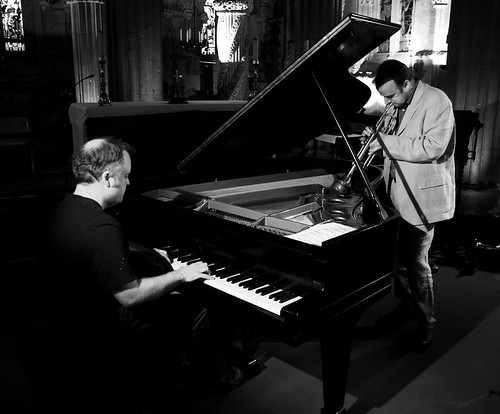 Colin Steele and Dave Milligan – again, not at this gig!

It was a huge pleasure to hear Milligan, who seems to get better and better: some of his solos had an intensity that was gripping. In the second half Steele took a break leaving the trio of Milligan, bassist Calum Gourlay and drummer Alyn Cosker to play an open, seemingly improvised piece – it would lovely to see Milligan do more trio work. Gourlay and Cosker were full of confident competence throughout the show – it is easy to take them for granted, but they add a lot to the bands they play in.

But it was Steele’s evening: literally muted but the notes flying from his trumpet.

Milligan played a solo set in the final weekend of the festival. I managed to miss the first half of his set – I got the time wrong (a schoolboy error…) but what I did hear was wonderful. Largely improvised (he told a story of his young daughter asking what he was going to play, so he had to tell her he didn’t really know), he produced a variety of moods – energetic, contemplative, quiet, all engaging. This was music to get lost in, full of depth. 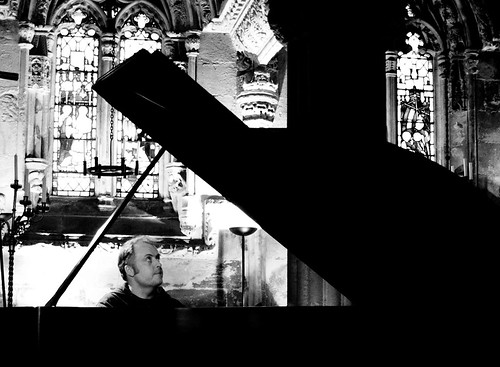 The band Thelonious – definitely not Calum Gourlay’s band, he kept telling us – played two nights at this year’s Edinburgh Jazz Festival, at two venues, and their performances felt quite different: one good and one excellent. 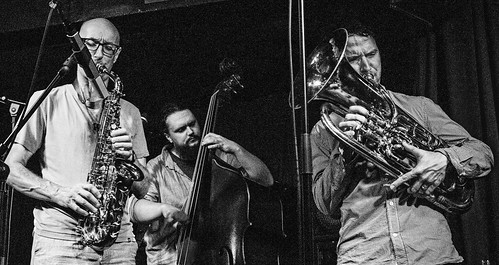 It is an interesting band: a tribute to Monk without a pianist. This confused some people – the guy next to me at the Jazz Bar, the first night, kept saying “How can you have a band playing Monk without a pianist?” The answer is: very easily. With Gourlay on bass, Martin Speake on alto and Hans Koller on euphonium, together with local drummer Tom Bancroft for these shows, the instrumentation allows one to concentrate on the melodies that Monk crafted. With a pianist, one would waste energy comparing them to Monk – was the pianist copying, did they get that bit right…? Without the choppy angularity of Monk’s piano playing and his sometimes idiosyncratic chords, it was all down to the tunes. 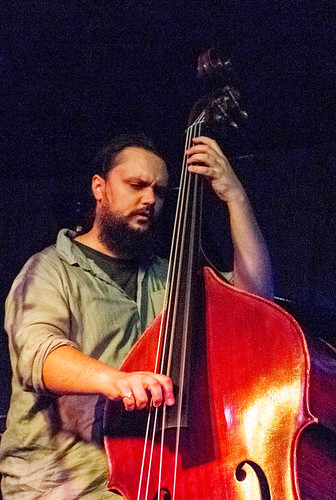 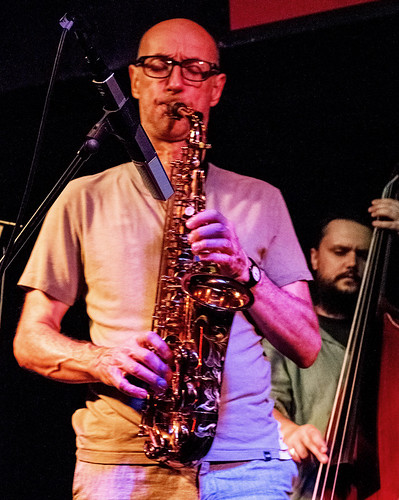 And what tunes. They didn’t repeat any number over the two shows, and still managed not to play my favourites (Well You Needn’t, I Mean You and, tops, In Walked Bud. Next time, guys…). They played famous numbers like Round Midnight, Epistrophe, and Pannonica and tunes I’d not heard before, such as Teo, We See, and Ask Me Now. I thought I knew Brilliant Corners, but clearly I was mistaken – perhaps the most jagged of the pieces played, it reminded me of Jackie McLean’s Melody for Melonae – and McLean was also recognised when the band played Jackie-ing. 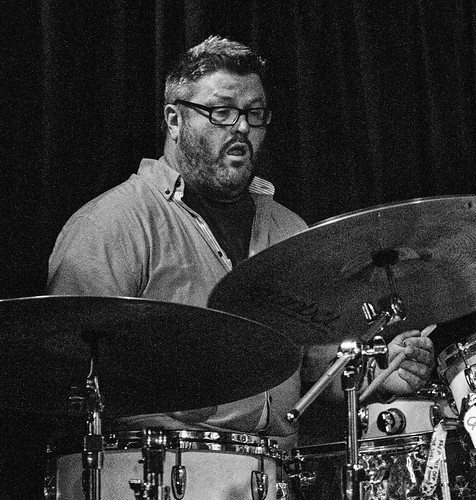 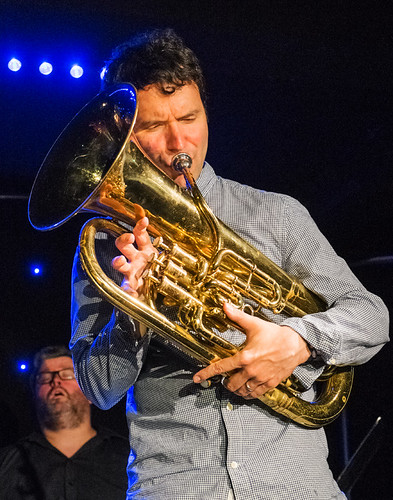 The euphonium gave the music a rich, rounded sound, in contrast to Monk’s often spiky feel. Speake’s alto sparkled, and the rhythm section of Gourlay and Bancroft were superb. Gourlay – who seemed to be everywhere in the first half of the festival – is a very confident, accomplished musician. I’m so used to seeing Bancroft play in more improvising bands that it was refreshing to hear him playing such swinging drums. 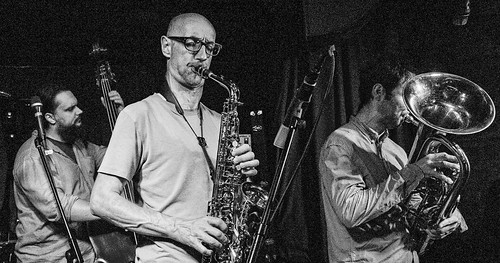 I thought the first night at the Jazz Bar was the better of the two shows, perhaps because I had more to drink, the atmosphere at the venue – the second night in the basement of the Rose Theatre wasn’t as full – or maybe just because it was a Sunday. But still great fun!