I reviewed the Edinburgh Jazz & Blues Festival for LondonJazzNews; here are some photos of the Sons of Kemet gig. 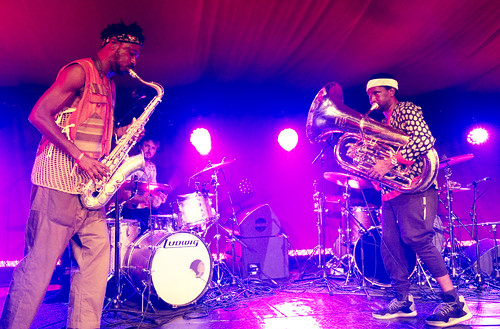 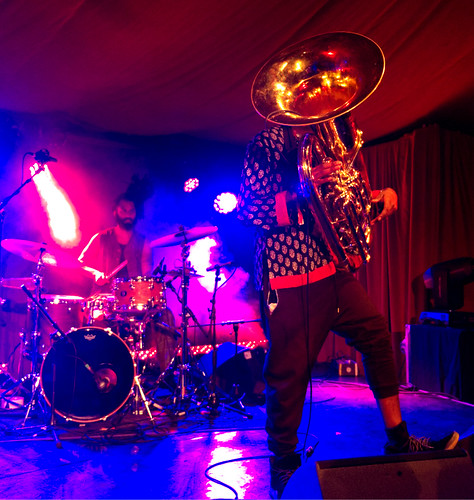 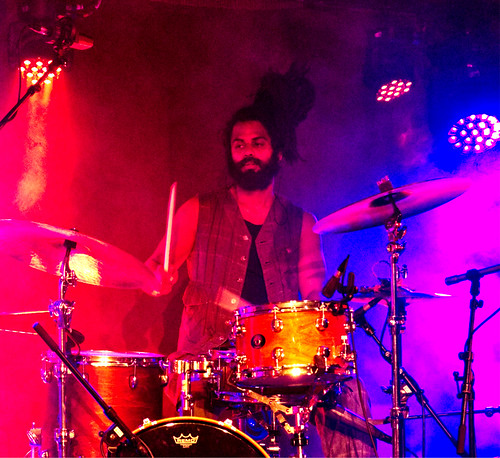 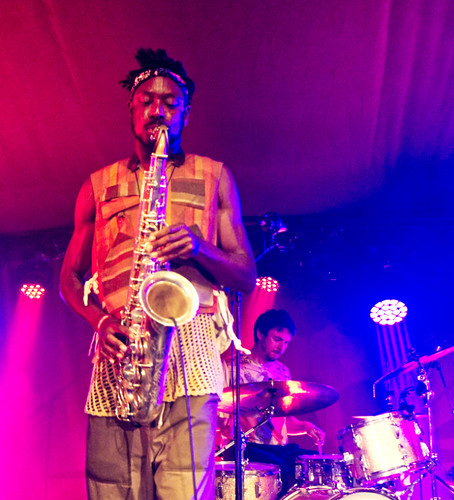 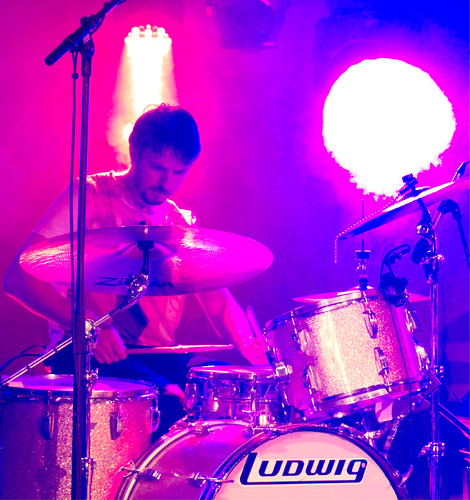 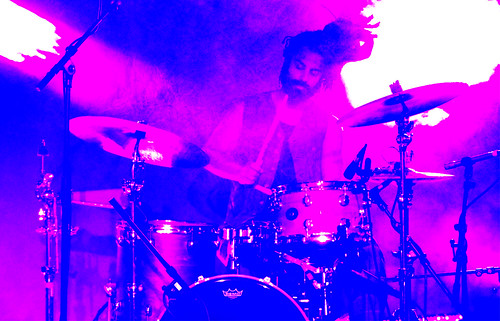 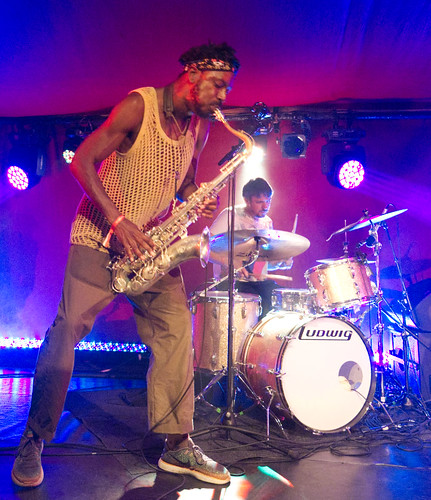 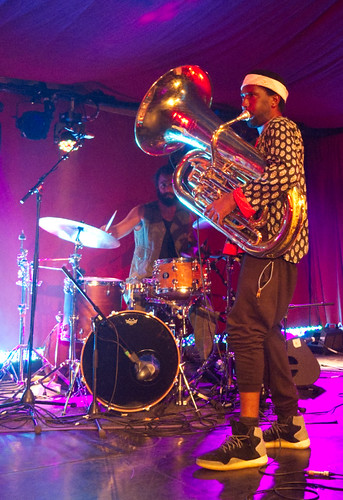 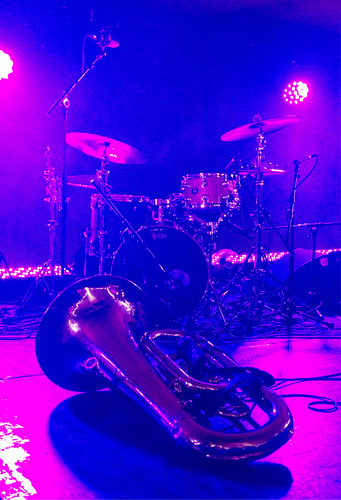 The Cockpit Theatre in London has been hosting a new, monthly jazz night, hosted and (I think) curated by Jez Nelson, called Jazz in the Round – because the audience sit on all sides. A square rather than a round, but hey.

This makes it a pretty intimate venue – it seats about 200, but it feels much smaller. That said, it is a theatre rather than a club: it has a different, distinct feel. Nelson has a specific agenda, too – to mix things up. he aims for each event to have both familiar and less familiar names; he doesn’t expect everybody to like it all.

For three bands a night, he charges only £7, all of which apparently goes to the musicians. (Personally I don’t understand why they don’t set the price to £10 – I bet they’d get the same number of people paying, and the musicians would get more money. I doubt anyone would object to paying less than the price of a pint of beer more.) One of the bands is a solo artist.

Strangely, there are no encores.

By chance, I’ve reviewed both nights for the LondonJazz blog. The first evening I bumped into Sebastian, who runs LondonJazz, who couldn’t stay and asked me if I could put something together; the second, I’d been tweeting about the gig, and Sebastian again asked if I could write another review.

Being in the round means that there are always some musicians who are not facing you; which makes photography a bit of a challenge! It is hard to work out where is the best place to sit, since the different bands face different directions. Someone will always have their back to you. The bands seems to like the set up, though – it is unusual for them to have so much contact with each other and with the audience.

The first Jazz in the Round featured Blacktop – Steve Williamson on saxes, Orphy Robinson on vibes and Pat Thomas on keyboards and electroncs. Free improvisation – pretty exciting, one-off and original. Plus wacky electronic noises…

The second night had a beautiful solo set by pianist Andrew McCormack, and then the somewhat bizarre – but very exciting – Sons of Kemet, featuring Shabaka Hutchins on saxes, Oren Marshall on tuba and Seb Rochford on drums… and Tom Skinner on drums! (The first night had not one drummer; they were clearly trying to go two better.) Amazing, but pretty hard to describe music. The last day I took advantage of more free music – in both senses of the term. There was a triple bill down at the Festival Hall – or, at least, I saw three bands… The first was a trio of Steve Lawson on bass, Otto Fischer on guitar and Tony Buck on drums. This trio didn’t grab me much – it seemed a bit like they were each playing their own thing without adding to each other; perhaps I couldn’t just make sense of it.

They were followed by Shabaka Hutchins on clarinet, Tony Bevan on sax, Phillip Barre on bass and Tom Skinner on drums. This grabbed me much more – Bevan and Hutchins played some fiery solos, Barre and Skinner pushed things along. This was much more exciting.

Best of all, though, was Orphy Robinson’s Cosmic Raw Xtra Four. I saw Orphy’s Cosmic Raw Xtra big band last year, and that was a brilliant gig. This quartet was quite different: with Lawson on bass and Fischer on guitar, and the great Steve Noble on drums, Robinson created some amazing music. It was a step above the rest – brilliant vibes and steel pan from Robinson, and energetic drums from Noble. They were all together: they played as a unit, not four individuals. It was a really exciting end to the festival.

I’ve seen three big bands in the past two weeks…

Two were on the same bill at the Vortex. I walked in to the middle of a set by the Guildhall Jazz Orchestra, made up (I think) of students from the Guildhall jazz course, led by Scott Stroman. I must have said it before, but there is something just joyous about the sound of a big band – all that brass just makes me smile. Broadly! The Guildhall Jazz Orchestra made a lovely sound in a set of originals with a couple of standards thrown in (any band that plays Goodbye Pork Pie Hat gets my vote).

They were followed by the London Jazz Orchestra, also led by Stroman; the Guildhall made a lovely sound, but the LJO were a couple of steps up: that bit more polished and professional, and, frankly, more certain what they were doing. It was a glorious sound! Maybe they are just that bit more experienced – the Guildhall students are just beginning their careers whilst the members of the LJO regularly feature big name players.

The only name I recognised in this gig was trumpeter Henry Lowther, but I hope I get to see other members in the next few weeks – they were pretty impressive, with impassioned solos all around.

And then… And then I saw the wonderful maelstrom that is tHE SponTANeoUS CosMic Rawxtra [sic!] at Kings Place, a pretty smart new venue. The low point: the number of people who turned out not enough, and this music deserved a lot more attention. The high point: ninety minutes of captivating orchestrated improvisation. This was brilliant and exciting music, several steps up from LJO (which doesn’t detract from the LJO at all!). The Cosmic Rawxtra were heavenly.

Taking his lead from the extraterrestrial meanderings of Sun Ra (the only jazz musician from Saturn. Apparently), Orphy Robinson “curated” the Rawxtra incorporating bits of Ellingtonia (a slowed-down version of the riff from “Blue Pepper” played on flute and bass clarinet set again furious double- or triple-time drums and percussion) and segments of modern jazz (another piece seemed to be based around the ubiquitous bass theme from A Love Supreme).

I recognised two Sun Ra numbers – “Love In Outer Space” and “Space Is The Place”, but these were arranged to fit the Rawxtra’s unique sound. Cleveland Watkiss scat singing was excellent (happy birthday, Cleveland! – I don’t like jazz singing, generally, but Cleveland was part of the band, not in front of it – and HKB FiNN‘s spoken words – poetry? rap? Whatever – worked really well. The flutes of Rowland Sutherland and clarinets of Shabaka Hutchins were suitably ethereal, and Brian Edwards’ tenor and Ntshuks Bonga’s alto saxes were powerful. I loved the energetic, sometimes manic but subtle vibes playing of Corey Mwamba – there was a great duet between Mwamba and Orphy Robinson on marimba. (Robinson played pocket trumpet on one number, which surprised me – it was that kind of evening!)

Behind it all, Camille Hands on bass and Steve Noble on drums and random percussion (with the occasional whistle thrown in) carried the music along; there was a really funky dub number, and a lot of free-ish jazz for Noble to get behind.

This was just great music: a celebration. Wonderful!